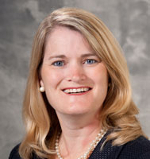 Madison, Wisconsin – With 28 years of experience in nursing, the past 15 as a pediatric clinical nurse specialist, Michele Schroeder knows plenty about maneuvering through the health care system for treatment.

But she didn't know anything about the path cancer patients face.

"When Dr. Wilke first described to me that breast cancer - or any kind of cancer - is a very individualized disease process, I didn't quite understand initially what she meant by that," Schroeder said. "Once she explained it as, because it arises from within your own body's cells, it's not a bacteria or a virus that you catch from an outside source - so therefore (it's) how your body reacts and responds. ... It was a like a big light bulb going on - 'Oh yeah, that made a lot more sense.'

"It’s very much so what you bring to it, it’s not just what’s generally known and what other people’s experiences have been. … Everyone is different."

Based on the size of Schroeder's tumor and her choices of treatment, Dr. Wilke and the experts at the UW Carbone Cancer Center were able to offer her options. Included in that was the possibility of not having an axillary dissection, a surgery that has long been considered commonplace in breast cancer treatment for women with a small amount of cancer that has spread to their lymph nodes.

The procedure removes the lymph nodes surrounding the sentinel lymph nodes - the ones that drain the cancer. Wilke, the director of the UW Breast Care Center, said the average breast cancer patient has two sentinel lymph nodes that are removed. The axillary dissection then removes a minimum of 10 more nodes and as many as 16 or 17, depending on the patient.

"Traditionally, you've always removed more lymph nodes," Wilke explained. "Once the sentinel nodes, or the first nodes, were positive, you took more, to make sure you weren't leaving any positive ones behind."

But a recent study by the American College of Surgeons Oncology Group showed that there was no difference in recurrence of cancer or survival rates of women who had only the sentinel lymph nodes removed compared to those who had an axillary dissection with the sentinel node procedure.

The ACOSOG Z11 study included 891 women across the country at both community-based and academic hospitals, including the UW Carbone Cancer Center.

"So that's great," Wilke said, then cautioned, "It's very important, though, that people realize that this is a select group of women who don’t need additional nodes removed beyond the sentinel nodes."

The study was done only with women who met a specific set of criteria: Their tumors were small - 2 inches in diameter or less - and mostly were estrogen-positive; all the women had lumpectomies; and most of them also underwent chemotherapy and radiation therapy.

Still, it's a big breakthrough for breast cancer treatment.

"It just shows that we can individualize care. We don't need to do the same thing for everybody," Wilke said. "And as we do more trials, we will figure out how much more we need to do for each group.

"It changes how we're going to treat patients. There are going to be some patients where we don't have to do an axillary dissection when we used to have to."

That was an option offered to Schroeder.

A wife who turns 50 in May and the mother of two boys (ages 7 and 11), the Madison woman was diagnosed with Stage II-A breast cancer Nov. 4 following a routine annual screening mammogram on Oct. 18.

Schroeder had a lumpectomy on Nov. 30, then had to decide whether to have an axillary dissection. The surgery can lead to lymphedema, a blockage in the lymphatic system that prevents fluid from draining properly and causes swelling in the arm. The condition also can produce numbness and limit the range of motion in the arm, and is not curable.

Because of her health care background, Schroeder said she's always made sure to "think things through and ask a lot of questions."

With cancer, though, the Meriter Hospital nurse faced "boatloads, buckets of information to process. ... And it's not a straight-forward, A to B leads to C kind of process at all. There are a lot of branches to it.

"Dr. Wilke was very clear about what her recommendations would be, but the bottom line was - and the Breast Center staff are very careful about this and consistent about this - they always frame it as, 'The bottom line is, it's your decision,' " she said.

"For me, I decided after reading through the information that Dr. Wilke offered, praying about it, thinking about my particular circumstances, talking with some close family and friends, I decided that I wasn't so sure I would get much more by going in and having that full lymph node dissection done."

Having individualized treatment made things at least a little bit easier for Schroeder in her fight against breast cancer.

"It's what it might mean for you and your family and what is of importance to you in your life and your trajectory and your journey," she said. "You have the opportunity to weigh all of that and let that be part of your decision-making."

Looking back, Schroeder says she's "absolutely" sure she made the right decision.

"I think I have experienced every side effect possible," said Schroeder, who had to reduce her work schedule from four days a week to two during chemotherapy.

Radiation treatment will start in a few weeks, with sessions Monday through Friday for six or seven weeks. Then she'll likely take the drug tamoxifen for five to 10 years.

"I would not volunteer for this particular journey, let's just put it that way," Schroeder said. "But I've learned a lot in the process. It's incredible what you learn in the process. (I've found) tremendous gifts and blessings embedded on a daily basis throughout the whole thing."