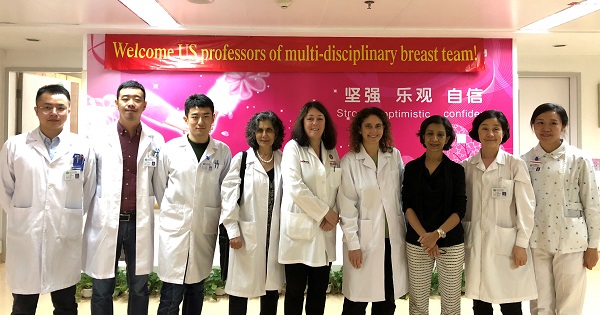 Many breast cancer patients at the UW Carbone Cancer Center know that Ruth O’Regan, MD, is one of the best medical oncologists around. This past January, patients in China learned the same thing.

O’Regan, the associate director of clinical research at UW Carbone, was one of five US physicians who traveled to China to meet with breast cancer patients, providing second opinions and learning about how cancer is treated similarly and differently there.

Initially, O’Regan was invited to China to present at three reviews of the San Antonio Breast Cancer Symposium (SABCS). SABCS is the largest annual conference of breast medical oncologists and researchers.

“There was one review in Beijing, one in Shanghai and one in Shenzhen and they had 200-250 Chinese cancer physicians at each,” O’Regan said. “There were three to four people from the US speaking and the rest Chinese, and we gave talks and had panel discussions about patients.”

In addition to presenting at the reviews, O’Regan was asked by her colleagues, Northwestern University breast surgeon Seema Khan, MD and Shenzhen People’s Hospital breast surgeon Hong Hu, MD to participate in an outreach program in Shenzhen. This program started three years ago when Khan began an affiliation to train a few of Shenzhen People’s Hospital breast surgeons, including Hu, at Northwestern. The program, funded by the Chinese government, also pays for a few U.S. physicians to visit Shenzhen annually and to meet with breast cancer patients.

“We visited with patients in the clinic who all came with their medical records, and we gave them our recommendations that they could then take back to their doctors. It was really a second opinion,” O’Regan said. “We also went into the hospital to see the admitted patients, and this was the best thing we did the whole trip. It was an interesting look at medicine and how they do it.”

This visit marked O’Regan’s first time participating in the outreach at Shenzhen Public Hospital, and she hopes to build the relationship. When the Chinese doctors come to Northwestern’s breast conference this fall, she hopes they will visit Madison and UW Carbone as well. She also wants to use UW Carbone’s expertise in having a nationally accredited Breast Center to help the Shenzhen physicians move their program forward.