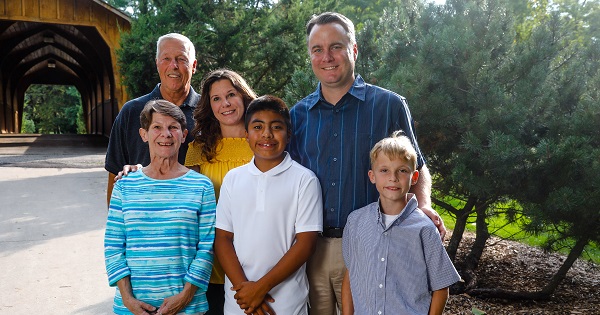 In 2005, Amy Beaman and her husband, Chip, were ready to start their family. After experiencing two kidney transplants — both of her parents, Gary and Helen Kastein, donated kidneys to her in 1993 and 2003 — Amy was leary about trying to become pregnant. Her doctors hadn’t explicitly forbidden her to try for a pregnancy, but they hadn’t exactly encouraged it, either.

Then: A handful of physicians and staff began to build the UW Health Transplant Program.

Now: More than 300 people contribute to the UW Health program, the fourth largest in the nation.

The Beamans, who live in Appleton, Wisconsin, decided adoption was their safest option. After much research, they settled on Guatemala as the country with which they would be working, and they were matched with a baby boy, Eli. In October 2005, they received a call from their adoption agency that they should start booking plane tickets, because the adoption was nearly finalized. They made plans to go out for drinks to celebrate—and 20 minutes later, Amy’s doctor called to inform her she was pregnant. “Honestly, I just bawled,” says Amy. “We had already been to Guatemala to meet Eli, and I was afraid my pregnancy was going to halt the adoption.”

It didn’t, and in November 2005, the Beamans brought Eli home. Because Amy’s pregnancy was considered high risk, she underwent multiple ultrasounds over the next several months, and in March 2006, Ezra was born prematurely at 3 pounds, 6 ounces. He spent a couple of months in the Neonatal Intensive Care Unit, but he didn’t experience any lasting problems as he continued to develop.

Now, both boys are healthy adolescents — Eli is 12 and Ezra is 11. “They see that I have to take medication every day to avoid rejection,” says Amy, “but it’s just a part of our everyday life.”

Amy is now an organizational leadership instructor for Moraine Park Technical College. She is healthy right now, but will likely need another kidney transplant in the future. Her brother was tested before her first transplant and is a match, so he may be able to donate kidney to her when she needs one.

For now, she enjoys her life as a busy mom of two — and a grateful daughter. “I say my parents have each given me life twice,” says Amy. “That sweater I give them at Christmas really pales in comparison.”