New Treatment May Save Piper from Effects of Devastating Neuromuscular Disease

New Treatment May Save Piper from Effects of Devastating Neuromuscular Disease 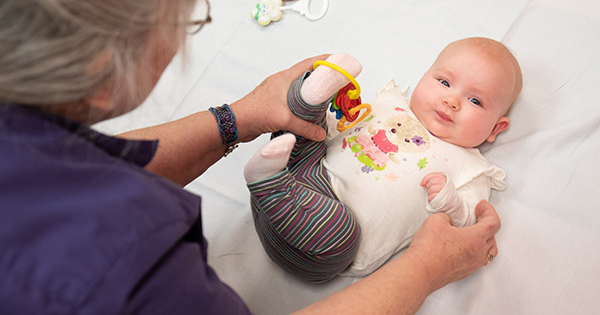 Piper Droessler is the first Wisconsin baby to be positively screened for SMA through newborn screening and the first to be treated with a promising new drug, Zolgensma®.

Piper Droessler will not know it for years to come, but there is reason to believe this 3-month old baby may be spared the devastating effects of an incredibly debilitating disease she was born with.

Born in November 2019, Piper appeared to be perfectly healthy - just like her two siblings, Ellianna, 6, and Finley, 3. When Piper was one week old, the Droessler's phone rang with shocking news from the family's local physician in Platteville, Wis.

"Dr. (Anna) Svircev told us that our brand-new baby girl had a rare, potentially fatal disease called spinal muscular atrophy, or SMA," says Caiti Droessler, Piper's mom. "Of course, we had never heard of it, but we were scared to learn that SMA can destroy most of your muscular strength."

That same evening, Caiti and her husband, Ben, spoke with Jennifer Kwon, MD, a UW Health pediatric neurologist from American Family Children's Hospital in Madison. The Droesslers drove to Madison the next day to meet with Dr. Kwon, learning more than they ever expected to about SMA, a disease that affects at least 12,000 people in the U.S. - about half of them children.

"There was bad news and good news," Caiti says. "The bad news was that an SMA diagnosis is something no new parent ever wants to hear. SMA causes muscles to become very weak, and can make walking, eating and breathing very difficult. Historically, children with SMA did not survive past 2 years of age. The good news, Dr. Kwon told us, was that just months before Piper was born, a new drug had been approved that could save Piper from serious damage to her muscles."

The new drug, Zolgensma®, is a type of gene therapy, given once through intravenous infusion. It prevents further motor neuron and muscle degeneration by replacing the defective or missing gene (SMN1) that, when absent, causes SMA. By using a new gene that tells motor neuron cells to produce more survival motor neuron (SMN) protein, muscle degeneration can be prevented if given to the baby early enough.

Zolgensma®, which can be given to most children before 2 years of age, can't reverse damage that has already occurred to a child's motor nerve cells and muscles, but if given within the first three weeks of life, the chances of living a normal life are promising.

The obvious question is how did the Droessler's doctor know that Piper had SMA in the first place? She exhibited no signs of illness or distress. The answer lies in Piper's special place in Wisconsin medical history.

Newborn Screening of SMA Can Be a Godsend 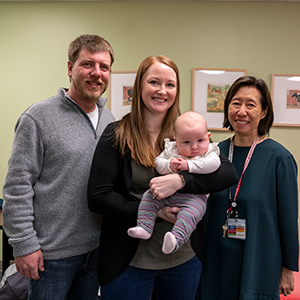 "Newborns with SMA like Piper look totally healthy," explains Dr. Kwon. "Fortunately, her diagnosis was picked up on her newborn screening."

Even more remarkable, says Dr. Kwon, Wisconsin had only begun including SMA on newborn screenings just six weeks before Piper was born. (Every newborn in the state is screened at 24 hours of life for 47 different conditions through a sample of blood collected from a heel prick.)

Once Piper's diagnosis was confirmed, things moved very quickly to set her up for the Zolgensma® infusion.

"It was all kind of a whirlwind," says Caiti. "It's a very expensive treatment, so insurance had to approve it." At 3 weeks old, Piper received her Zolgensma® infusion. Since then, she has had eight blood draws and clinical assessments, and everything looks good so far.

"It's so hard to believe Piper really has SMA because you would never know anything was wrong with her," said Caiti. "She's a very happy baby and a good eater."

Mary Schroth, MD, Chief Medical Officer for Cure SMA - the leading national organization representing individuals and families impacted by SMA - says Zolgensma® is just one of a few new SMA treatments, including Spinraza®, that either have been or are soon expected to be, approved by the U.S. Food and Drug Administration.

"This is a very exciting time for SMA patients and their families, because there were no treatments available until the first one, Spinraza®, was approved in 2016," says Schroth, a former UW Health pediatric pulmonologist. "Another treatment, Risdiplam®, is expected to be approved later this year.

While none of these therapies are totally curative, they are making a big difference in the quality of life for patients. In concert with more babies being tested for SMA at birth, we are making great strides and expect this progress to continue."

Piper - who was featured in a Madison newspaper story as the first Wisconsin child to be diagnosed with SMA through newborn screening tests and receive Zolgensma® - soon became the talk of the town in Platteville.

"It's kind of strange because so many people saw the story," Caiti says. "We've also used social media to connect with many other SMA families around the country. Hopefully our situation will increase awareness around the country so more states will include SMA on their newborn screening process."