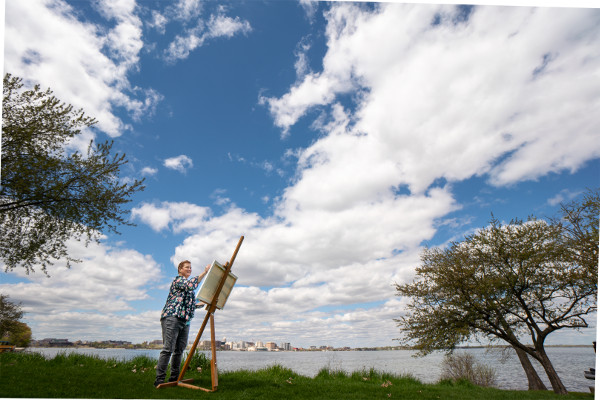 For about 20 years, Lorry Adkins lived in constant fear that she would lose consciousness due to low blood sugar from her type 1 diabetes. Two of the times this happened, the Knoxville, Iowa woman nearly died. Then, a co-worker showed her a mailing she received from the UW Health Transplant Program in Madison. The mailing explained how patients with diabetes were finding new hope through a pancreas transplant. Lorry booked an appointment in Madison and it changed her life.

Diagnosed with diabetes at age 9, Lorry stayed relatively healthy as a child and young adult. Then, in her 30s, she started experiencing hypoglycemia unawareness, a rare complication in which her body failed to generate the characteristic symptoms of hypoglycemia that would warn her of low blood sugar levels. At the time, she was a single mom of two young children. She remembers one incident when her 8-year-old son came into her room at night to cuddle, noticed she wasn't responsive, and gave her a shot of glucagon - a hormone that can treat severe low blood sugar.

Her first near-death experience was when she suffered hypoglycemia while driving and drove into a ditch. A passing motorist called 911 and she received treatment at the local emergency room. Another time, she was working outside her house in November and passed out in her front yard. Her husband, who works as a truck driver and was out of town, panicked when he couldn't reach her and called a neighbor to check on her. When the neighbor found Lorry, her body temperature was only 82 degrees. She stayed overnight at the hospital and was able to recover. "It was really scary, not knowing when my blood sugar was going to dip too low," she says.

Lorry works as a nurse in a clinic and decided to talk to a physician assistant (PA) there about whether she might be a candidate for a pancreas transplant. The PA showed her the information from UW Health, and Lorry called Nancy Radke, RN, MSN, transplant coordinator. It took about a year for Lorry to become active on the wait list for a new pancreas because she learned she had heart problems and needed stents installed. But once she was finally active, she received a call just a day later that an organ had become available.

Lorry received her gift of life in August 2018 at University Hospital in Madison. Since then, Nancy, who has been her coordinator throughout the entire process, has become a close ally. She checks in on Lorry frequently and has been a welcome source of information. "If I ever have any questions, she's very easy to reach," says Lorry.

Gone are the days when Lorry had to carry around all her emergency sugar supplies. "It's unbelievable," she says. "It was such a miracle to have this transplant. I'm ecstatic that I don't have to worry about low blood sugar anymore. Now I can do whatever I want to do, whenever I want to do it."