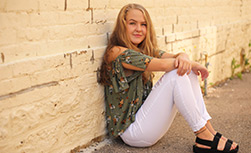 Having your head shaved is the last thing a kid in middle school would want. Now 17, Sadie looks back on how her challenging medical journey helped her grow as a human being.

Kristine Sutter will never forget the night when she suddenly woke to the jarring sound of her 11-year-old daughter Sadie having her first seizure.

"Sadie and her sister were sleeping on the living room couch," recalls Kristine. "Suddenly in the middle of the night, Sadie starts crying out, 'Wo, wo, wo, wo, wo.' I ran to the living room. As she is yelling, she had one arm straight up and the other was stiff."

"We had no idea what was going on, so we called 911, but by the time the paramedics arrived, Sadie had stopped seizing."

Sadie had a second seizure a few days later, and many more over the next several months. Medications were prescribed, but the seizures kept coming even as the dosages were increased. Sadie's spirit was breaking, and she began feeling helpless.

Brain scan after brain scan was performed until finally, an MRI would reveal the culprit. Sadie had a brain tumor that was causing epilepsy. At age 12, she would need an operation to remove the tumor.

Brain surgery was scary enough for Sadie but having her head shaved before the operation was perhaps just as traumatic for a kid in middle school.

"I felt judgment and I let that rule my life," Sadie wrote in an essay about her experience. "I refused to go to social events, continue my sports or even talk to people in school. My lack of hair and the possibilities of seizures instilled fear in me."

Fortunately, Sadie went nearly a year following her surgery without another seizure.

"Then disaster struck," she continued. "As I lay on the ground, shaking once again, I remember my dad crying over me, as we all knew that surgery was necessary for the second time."

Another head shaving was in store, but this time, Sadie didn't worry so much about being judged.

Her UW Health pediatric neurosurgeon, Bermans Iskandar, MD, even came in on Father's Day 2015 to perform the surgery at American Family Children's Hospital. 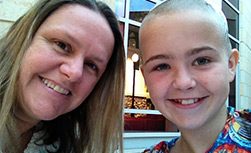 "The surgery has two phases," says Dr. Iskandar. "First, we put electrodes on Sadie's brain and monitor her in the Pediatric Intensive Care Unit," says Dr. Iskandar. "Once we see enough seizure activity, we proceed with the second phase, which involves removing the area that is causing the seizures."

Sadie's surgery, says Dr. Iskandar, was especially challenging because her tumor was embedded in the brain's motor area that controls arm, hand and face movement.

To ensure that this region would not be injured during surgery, Dr. Iskandar electrically stimulated Sadie's motor function region to identify where it was so that he could avoid it while removing the seizure zone.

Nearly 3 and a half years after the second surgery, Sadie is 17 and has been seizure-free with normal motor function. She is feeling great, is entirely off medication and knows that her chances of staying seizure-free increase over time.

A highly accomplished student at Mount Horeb (Wisconsin) High School, Sadie looks forward to starting college in the fall of 2019.

She also has matured in a way that speaks volumes, especially when it comes to not sweating the small stuff.

"I would not have the confidence I do now without overcoming the hardships I went through," Sadie wrote. "I have learned to love others for who they are, for everyone is fighting their own battles. Never judge anyone because you do not know what is going on behind closed doors. Although my experience was physically and mentally taxing, I would not be who I am today without them."