Related
Kathi, who received Mike's liver, shares her thoughts about being an organ recipient.
Read Kathi's story
The following tribute was written by Jill (pictured below left; next to her is Kathi, the recipient of Mike's liver).

My husband, Mike was only 45 when he died. He was full of life until the very end.

One thing he'll always be remembered for is the beautiful smile that he always wore. I not only know that, but so did the 800 or so people who went through the receiving line at his funeral. 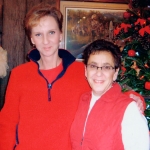 Mike was my best friend for almost 16 years before we fell in love. During all those years we helped each other through some really tough times. When he died, we had been married just shy of three years. I'll always be grateful that we had so many years together, as friends and as a married couple.

Everything Happened So Quickly

The day Mike died, everything happened so quickly.

I was told he was gone almost immediately from a ruptured brain aneurysm. Upon diagnosis, one of the first questions I can remember being asked was if Mike and I had ever discussed organ donation. My answer (yes!) was immediate.

Mike was taken to the ICU and put on life support until recipients for his organs could be found. The process is very complex, and it took much longer that I could have imagined. But I used those 24 hours to reflect on our past, and to memorize every line on his face that life had given him. I never stopped praying that a miracle would happen, and that he would open his eyes and I would take him home - just as I had imagined on the drive to the hospital. That never happened, and I knew in my heart that everything I was going through during those hours would help me within the next months and years.

Adament about Being an Organ Donor

Mike had a very dear uncle who never made it off the list to receive a heart transplant. That is why he was always so adamant about being an organ donor.

We talked about it a lot, for me perhaps too much as I was not comfortable in talking about death, especially ours. However, I can clearly recall two instances when donation came up, not including Mike's uncle's death that just stuck in my head during those hours at the hospital.

Mike was a lover of all sports. He was watching the college basketball Final Four tournament and I could hear him yelling for me to come and see something on TV. He was pointing at the TV and told me to look at the man who was sitting on the bench next to the rest of the team. He was going on and on about this assistant coach who was waiting for a double-lung transplant.

He told me that if he ever had the opportunity to give something like that, that he would, and that I should not hesitate to do it for him. He called it "an opportunity," but all I could hear was that he was talking about his death (which would hopefully not occur for many, many years.) It was all I could do to not run from the room, but not before he begged me to go to the DMV and get the orange dot on my driver's license. He may not have realized it then, but I did hear everything he said.

My brother died just six months before Mike. While he could not be an organ donor, our conversations happened to get a little deeper. At that time I was okay with us talking about it. My brother was only 52 when he died, and he left behind a teenage son.

I realized then that we never really know what tomorrow might bring. Of course Mike didn't know what was going to happen just six months later, but because of those talks I never had any doubts about the things I did, and still have to do.

Realizing the Impact of Organ Donation

Just a few months after Mike died, I received an anonymous letter from the recipient of his liver. It was bittersweet. My hands shook as I read it. Before I knew it I had a reply letter ready to go in the mail, and shortly after that we shared each others names and addresses and planned on meeting.

Kathi and her husband Brad are now part of my family. Kathi is a part of Mike, and would not be here without him. While I have not had correspondence with any of the other recipients, I pray that they are surviving and enjoying life the way that Mike did.

Within the first year after Mike's death, I become involved with a local organization Donate Life North Central Wisconsin. Most of the members are organ recipients.

When I walked into the home of a recipient for the first meeting, and saw the pictures of his grandchildren on the wall, I realized that he would not have been a part of those children's lives without his own organ donor, someone like Mike. I felt that even though Mike was not his organ donor we still held a common bond. Under the circumstances that group of people, and Kathi, are the best things that could have ever happened to me.

I share Mike's story, and my journey, to help educate people about the importance of discussing their organ donation wishes with their families. No one should ever have to second guess their decision to donate their loved-one’s organs. It was such a blessing to me to know exactly what Mike wanted.