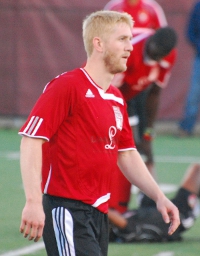 MADISON - During the day, Sean Ronnekleiv-Kelly is one of the top general surgical residents at University of Wisconsin Hospital and Clinics.

At night and on the weekends, the 30-year-old is a starting defender for the Madison 56ers, one of the nation's top men's amateur soccer teams.

"It's excellent," Ronnekleiv-Kelly said of resuming his soccer career, which included playing for NCAA Division II Colorado School of Mines in Golden, Colo., from 1998 to 2001.

"I figured that any sort of competitive soccer was past its time."

Time was the main reason Ronnekleiv-Kelly wasn't on the field very often during his first two years in the seven-year general surgery residency program.

"Pretty much my first full year of residency, I didn't really play soccer at all," said Ronnekleiv-Kelly, who grew up in Portland, Ore. "After about a year, I realized that I missed it too much, so I started trying to play a little bit more."

After playing recreationally, he started playing on more competitive teams and eventually learned about the 56ers, who play in the National Premier Soccer League's Midwest Region.

"Originally, I basically came out just to practice with the team to get back into shape," Ronnekleiv-Kelly said. "I didn't expect to be able to play with them, because I knew that everyone here is at such a high level."

But he's ended up being an integral part of the team, which went 8-2 in winning the Midwest Region championship and will play at the NPSL Final Four tournament July 29-31 in Madison, Ala.

"He's a very good one-on-one defender and he's a good leader. Those are two things that are really invaluable in a team," said 56ers coach Jim Launder, who has an extensive coaching resume that includes guiding the University of Wisconsin to the 1995 NCAA championship.

"He's a sound technical player in terms of he doesn't try complicated stuff and he picks the right choices most of the time and he makes it work. You can't go wrong with a guy like that. Plus, he's just a great human being, a great guy to have around the team. So for me, he fits perfectly with us."

And somehow, he's managed to effectively juggle his time between the residency program and playing competitive soccer.

“Can you believe that? I just found that out myself, actually. I didn't even know that,” said Dr. Greg Kennedy, Ronnekleiv-Kelly’s mentor in the program.

“And he's one of our top residents. So it's amazing that he's been able to play competitive soccer at the level he is and still be the top-shelf resident he is.”

Ronnekleiv-Kelly has missed only one game and a handful of the 56ers' twice-weekly evening training sessions, despite working up to 80 hours a week at the hospital.

"My call schedule just worked out pretty much perfectly, so that the weekends I was on call, it was a home game that I might be able to get to and then the weekends when I was off call were the weekends we were traveling," Ronnekleiv-Kelly said of the 56ers’ schedule, which included games in Milwaukee, Eau Claire, Minneapolis and Chicago.

"During practices, I carry my pager with me and if I get called back, I have to go. But it generally doesn't happen that way, I've been quite fortunate. For games, when I can't check my pager, I just talk to one of the fellow residents and ask them to cover for me for a couple hours and they've been very generous."

Launder said he's worked with players of all types of backgrounds and professions during his long coaching career, but nothing quite like this.

"Not somebody in that occupation or at that level. It is very unique," he said. "Like one day he was late - he got to practice right near the end of practice. And he was like, 'Sorry coach, but I had to sew this guy up.' "

As an amateur team with a limited budget, the 56ers can't have an athletic trainer at their practices - a UW Health Sports Medicine athletic trainer attends all of their home matches - but having Ronnekleiv-Kelly on the team gives them the next-best thing. 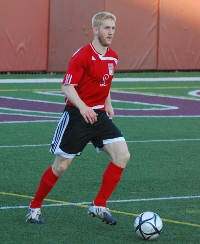 "A couple times he's checked out teammates' injuries," Launder said. "Sometimes it winds up being nothing, but it's nice to know that it's nothing and there's a guy that's a pro telling you that."

The training sessions and games are also healthy for Ronnekleiv-Kelly - especially mentally.

"It helps significantly," he said. "It gives you periods of time during the day when you can sort of forget about other things. And then obviously any sort of physical activity definitely is beneficial, I feel ... for sort of keeping sane. When it's coming toward the end of the day and I know I have soccer practice, I really look forward to it, even if I just feel tired and lethargic."

Bright Past, Present and Future

Ronnekleiv-Kelly earned his undergraduate degree in chemical engineering at Colorado School of Mines before changing directions and attending the University of Colorado School of Medicine in Boulder. When he graduated in 2008 and it came time to find a residency program, UW was his top choice.

"UW is one of the top surgical residency programs in the country," Ronnekleiv-Kelly said. "I ranked them first in my match and luckily they selected me as well, so it just worked out perfectly."

"Every six weeks or so you would move to a different subspecialty - trauma surgery, burn surgery, critical care, things like that," Ronnekleiv-Kelly said.

But Ronnekleiv-Kelly does have a specific interest: Surgical oncology. To that end, he recently started a two-year stint in the program during which he'll focus on research in a lab headed by Dr. Kennedy, who specializes in colon cancer.

"They try to match you up with a mentor who's going to work well with what your goals are and what the mentor's goals are," Ronnekleiv-Kelly said. "It just turned out the person I figured I would have the most successful experience with is a colorectal surgeon."

Kennedy said he’d be thrilled if Ronnekleiv-Kelly decides to join him in the fight against colon cancer, but expects success for him in whatever area he chooses.

“He's really an amazing guy, I think,” Kennedy said. “He’s very humble. He's truly one of our brightest - he scores well above the 85th, 90th percentile on all of our (exams). He's really a brilliant guy. And you'd never know it; he doesn't brag at all. He’s very unassuming.”

Ronnekleiv-Kelly is much the same on the field – not flashy, just smart and effective. During a recent match, the 56ers’ captain, Henry Aiyenero, was substituted and tried to put the captain’s armband on Ronnekleiv-Kelly. But he declined, allowing a younger teammate to take the honor.

Besides, he hopes he has plenty of games left to play down the road. Now that Ronnekleiv-Kelly again has a competitive soccer career, he’s looking to continue it - and improve.

"I'd like to get into a little better shape over the next year," he said. "The next two years I'm doing research, so my schedule is a lot less strenuous - it's closer to 50 or 60 hours a week instead of 80. So hopefully I'll be able to get into better shape, closer to where I was when I was 20 or 21."

That's just about the average age of his teammates with the 56ers, whose ranks include mostly college players and a few teenagers who recently graduated from high school.

"Some of the younger players on the team sometimes will give me a hard time about being 30," Ronnekleiv-Kelly said. "Luckily, there's a few other people that are older than me."