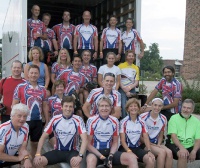 Bike MS is a fully supported, two-day event bringing nearly 2,000 cyclists and volunteers together to move toward a cure. UW Health has supported the team as a corporate sponsor since 2003.

Twenty-three people rode with UW Health Red's Riders from Waukesha to Madison on Aug. 6 and 7.

The team was started by team captains Barbara and Jerry Ryan and named in honor of their son, Eric, who is one of 400,000 people throughout the U.S. living with multiple sclerosis.

Cyclists choose to ride 62.5, 75 or 100 miles each day, and Eric rides with the team most years. As a top-tier team, UW Health Red's Riders are given VIP treatment along the way, and the team members forge a great connection to one another and also have a great deal of fun.

"What a fantastic team to raise this much money for such a worthy cause," Barbara Ryan said. "Jerry and I could not be prouder of this team effort."