It Takes a Hospital to Throw a Wedding

It Takes a Hospital to Throw a Wedding 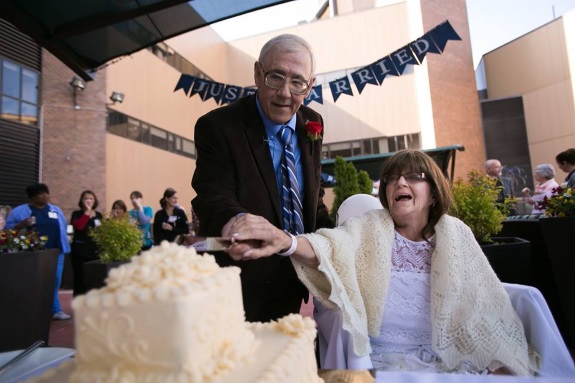 Editor's note: Denise Rheaume and Bob Ceplina's love story and wedding at the UW Carbone Cancer Center touched many. We are sad to share that on June 24, 2016, just weeks after the wedding, Denise passed away. Our thoughts and prayers go out to her family and friends.

The bridal procession began up on B6/6.

It’s usually a quiet place, where cancer patients are recovering from stem cell transplants. But on this bright May day, there was a wheelchair festooned with ribbons and bows and a “Just Married” sign waiting outside the door.

Inside, the patient bride, Denise Rheaume of Rhinelander, was primping with the help of daughter Megan Rheaume-Brand, and a bevy of bridesmaid nurses and nursing assistants from the floor.

Soon, B6/6 nurse Tenzin Lhamo arrived with a lacy dress for her patient. In one pocket of her scrubs was her wedding reading, an essay from the 14th Dalai Lama called “The Paradox of our Age.” In the other, meds her patient might need to make it through her first outing off the IV and infection control mask.

Ten days earlier, Denise’s loved ones thought they would be planning a funeral, not a wedding. She had a stem cell transplant on March 15, but the donor cells from her brother, Julian, worked a little too well. They vanquished her acute myeloid leukemia, but then they attacked her own body.

By Mother’s Day weekend, she was in in stage four graft versus host disease, barely hanging on. Friends and family gathered to say goodbye.

That Saturday, her fiancé, Bob Ceplina, noticed something as he fed ice chips one by one to Denise: The light was returning to her eyes.

Theirs is a story of love lost - and then found, again.

They met in 1969 when Bob says his own “summer of love” arrived in the north woods of Wisconsin. He was visiting Rhinelander from Milwaukee, on vacation, and still remembers his first sight of Denise Rheaume, a hippie chick with hair down to her waist.

“There was this aura of light around her. She looked like an angel.”

They had good years together, with their menagerie of cats and dogs. Then they went their separate ways, marrying others and being mostly out of touch for decades.

“I’ve been trying to get back to her for 40 years, but something always went wrong.”

Last summer, with Denise newly single, they fell right back in love when Bob came over to help her refinish antique doors for her Victorian house in Rhinelander. But their reprieve was short-lived, as Denise was diagnosed with acute leukemia in October.

Bob got down on bended knee on Valentine’s Day to ask Denise for her hand.

They had planned on a summer wedding. But Denise’s physician, Dr. Walter Longo, suggested they might want to move it up, noting that the hospital kitchen is known for an excellent carrot cake.

From there, the hospital became like a scene from Harry Potter, with house elves scurrying hither and yon to make it happen.

How University Hospital Does Weddings

“The whole thing started when a nurse, Shari Signer, came to me a week ago to let me know they were getting married,” nurse manager Vicki Hubbard said. Vicki sent one email to Ralph Turner, vice president of facilities and support services, asking to use the hospital’s Haberman Terrace for the ceremony.

“Within hours, I got not just Ralph’s permission, but 50-plus emails from others wanting to be part of this event.”

Robin Werner and a team from environmental services gave the Haberman Terrace a spring cleaning, and the plant engineering folks contributed tables, chairs and flowering plants.

Down in the kitchen, pastry chef Katie Festge was soon decorating a tiered carrot cake with cream cheese curlicues. Executive chef Ellen Ritter, her sous chef assistant Lisa Bote and Lori Pullara from catering pulled together the rest of the buffet. Administrative assistant Nicole Brown tracked down everything from a microphone to flowers to the cake knife and champagne flutes.

For decorations, interior architect Ardis Hutchins brought in banners left from her own daughter’s wedding, and others worked to weight the decorations and white table clothes so the downdraft from the Med Flight helicopter wouldn’t blow them off during the ceremony.

Senior art coordinator Amanda Kron set up her harp, and soon ethereal music began drifting up from the terrace.

Up in the room, the nurse bridesmaids styled a wig from the wig salon at the UW Carbone Cancer Center.  Anita Zahorsky, the unit’s volunteer who’s also a cosmetologist, helped – and also did Denise’s make-up. Finally, nurse manager Vicki Hubbard and her B6/6 team decided that the bride was perfect.

As the bridal procession rolled from the B6/6 unit into the clinical research floor, patients came to their room doors and nursing stations broke into applause. On the fourth floor, staff and patient flooded out of the neuroscience floor to catch a glimpse of the bride.

And as she rolled onto the terrace to the strains of harp music, the windows on the hospital floors above filled with patients and staff, all wanting to be a part of what the wedding banners rightly called the “Best Day Ever.”

After the Rev. Andrew Jones of St. Andrew’s Episcopal Church pronounced them man and wife, Denise took a moment to thank the crowd of family, friends, caregivers and fellow patients.

“I want everyone to know that while cancer kills, love heals.”