"On September 27, 2009, I got a phone call no parent wants to get," she said while addressing the sophomore class at Middleton High School last Friday. "The hospital called to tell me that my son Nathan had been in a car accident. Nothing could have prepared me for the news we got at the hospital."

In the hours following that phone call, Lori, a pediatric medical receptionist at UW Health's West Towne Clinic, would learn that Nathan, then a 17-year-old Middleton senior, went to a party where he drank beer and smoked marijuana before, despite the protests of his friends, attempting to drive home.

He drove west in the eastbound lane of Highway 18/151 in Springdale, Wisconsin and crashed into an oncoming car, killing its driver and critically injuring a passenger as well as himself. 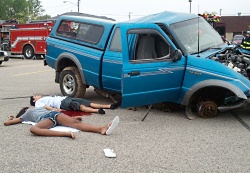 "To hear that it was caused by being under the influence of alcohol and marijuana was incomprehensible to me," Lori said. "We always said, ‘If you're ever in a situation where you've been drinking, call us.' We never thought he'd make the decision to drink and drive."

On Friday Lori tried to impress upon the Middleton students the importance of avoiding a similar, potentially disastrous choice by staging a dramatic reenactment of her son's ordeal involving UW Health emergency services physicians and personnel, the Middleton fire department and the Madison and Middleton police departments.

It started on the stage of the Middleton High School Performing Arts Center. A dozen kids talk and laugh amidst plastic cups and half-empty beer bottles. A high school party, and the young actor - a Middleton student - who plays "Tyler" announces he is leaving. His friends beseech him to catch a ride with someone who hasn't been drinking and smoking, but he ignores them.

As the stage goes dark we hear the 9-1-1 calls, first saying someone is driving on the wrong side of the highway and is all over the road, then relaying word of a bad crash.

How bad? The Middleton students are asked to go out to the parking lot behind the school to find out.

Two cars recreate the aftermath of a head-on collision. Two young bodies lie on the pavement, unconscious but united by a pool of blood. Emergency services personnel uses the jaws of life to extract Tyler from his car while police officers evaluate the driver and passenger from the other car. Tyler is carted to the ambulance, as is the driver of the second car. The passenger will not join them. She is zipped into a body bag for transport to the morgue.

The students return the Performing Arts Center, where UW Health staff attend to Tyler in a mock emergency room. A nurse announces his blood pressure is 90/50. Too low to wait for an x-ray, says the doctor, who inserts a breathing tube.

"This is going to hurt, son," he tells Tyler, who moments later is wheeled off to surgery while his mother calls out to him from the gurney's wake.

The reenactment spares no detail. An investigator informs the parents of the woman in the crash that she died from her injuries. ("This world will never be the same," Colleen Little from the Dane County Medical Examiner's Office told the Middleton students.) Despondent, Tyler sits at a table with his attorney as a judge reads his prison sentence, telling him, "Life as you knew it is over now." Two police officers handcuff Tyler and lead him away to serve his time.

According to The National Highway Traffic Safety Administration, the leading cause of death among 15- to 20-year-olds is car accidents, and 28 percent of teens involved in such accidents have used alcohol or drugs.

After the hour-long reenactment the organizers and participants handed out keys to the entire sophomore class as part of the KEYS (Keeping Everyone You Know Safe) movement, so the students will see them before they start up their cars and remember the responsibilities attendant to the privilege. Lori hopes her efforts make a stronger impression than if she merely stood behind a lectern on the Performing Arts Center stage and told Nathan's story.

"(Lori's daughter and her friends) told me they don't really care what adults talk about," Lori said. "By seeing this presentation and following someone their age...I believe it helps. I think they're intrigued enough to realize, ‘Wow, this really happened. And he went to prison for his poor choice.'"

Did it work? Middleton principal Dr. Denise Herrmann spoke to some of the students after the reenactment.

"They said this was really eye-opening," said Dr. Herrmann. "Teenagers can think they're infallible. The thing that was so meaningful about today's production was that it started from the party and involved the accident, the hospital, the judicial element...It gave a whole picture of the domino effect of making a poor choice."

"Putting statistics out there would be boring for high school sophomores," added his friend. "People would stop listening. But since they added in a dramatic part, people got into it. It really helped get the message across."