The Eulogy I'll Never Use

The Eulogy I'll Never Use

Author Jake Cashman is the son of Peter Cashman, a Chicago resident who received a liver transplant at UW Hospital and Clinics in 2010. Jake wrote the article below for his personal blog. It is published with his permission on uwhealth.org.

Today is the day I get something off my back, once and for all. After turning it over and over in my head for years, today is the day I write a eulogy for my father, Peter Cashman, who is still very much alive.

My dad and I went to the Bears game together, again, something we've been doing since I was small enough to fall asleep on his lap at games.

There we are at the Bears-Lions game on November 10, the first one we went to together in the 2013 season. For those of you who haven't heard the story of my dad's miraculous liver transplant via the University of Wisconsin-Madison and a young Wisconsite mother taken early, here is the NBC Sports Night in America's story on it. I can't say it any better than they did.

You may notice that one of the only lines I have in that five-minute video is, "Being the oldest son, I rehearsed what I would say at his funeral. Like. A lot."

Well, everyone, it is true that I thought about my father's eulogy before his life-saving surgery. I've also thought about it a lot since. I wish I had come up with a better descriptor than, "Like. A lot." So, here I am, typing away almost five years later.

I could use this space to eulogize my father, but the catch is he is alive and well, and I see him once a week. I still get to go to Bears games with him, and he still attends my fourteen-year-old brother's marching band events. Jen Kjos-Quinlan, the facility manager at Saint Xavier University's Shannon Center, never knew my dad before the surgery, but she was my boss while my dad got sicker and sicker and nearly died. She knows our story. So, after meeting him, she told me that he's "a hugger" and "couldn't be happier."

The most beautiful moment in my life and the life of my family has to be when my sister Andrea graduated from Loyola University's Marcella Niehoff School of Nursing. No more than two months after my father was taken to the edge of life and gradually brought back, that ceremony crystallized the realization that we no longer had to fight acute liver failure. 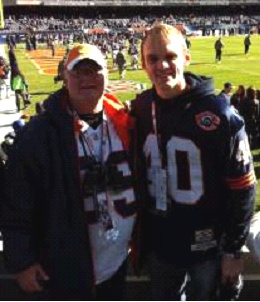 During commencement, my family and I all kind of looked at each other and beamed in pride, realizing finally that not only had we made it, but that we made it and the reward for our hard work and steadfastness would be permanent. It would be obvious that we achieved something, because my dad would still be walking around, talking, and now, hugging.

I don't remember if my dad was a hugger before the liver transplant surgery, but he definitely is now. He couldn't be happier, and I couldn't be more fortunate.

So, why I am writing?

The people who were there to hold me up, to drag me through the fear of losing a parent at the age of 19 - they are all still around. They all still act in the same ways that made me stronger, that lifted me up and made me keep fighting.

My best friend, Jim Lonergan, is the most tepid, unmovable person I have ever met. He is not the type of person to admit it, or to even think about it, but his personality was most likely shaped by the passing of his father. When Jim was about 10 years old, his father passed away, from causes that have never been made totally clear to me.

I was not friends with him at the time, but I do remember attending his father's funeral, something my own dad made happen. I was one of few kids in our grade to attend. I remember sitting with Jim. I remember his cousins, almost all of whom I now know well, trying to joke and lighten the mood. I remember Jim sitting there, already adopting the disengaged positions and slow-to-react body language that would become his modus operandi to this day.

I remember thinking that he had experienced something different. Something adult-like that I would never understand.

And when we lost touch briefly in high school, it was a letter, written by me and sent to him while he was on a spiritual retreat, that brought us back together. The letter applauded him for how he dealt with the passing of his father at a young age, written by me when right around the time when I was told that my father, without a miraculous liver transplant, would die within two years.

So, when Jim was there nine years after his tragedy, when my dad was dying and I needed rides from the hospital, it went unspoken that his actions were in some way connected to his father's death. If Jim were the type of person to think deeply (which he isn't), he might say that he was doing the work, fighting the fight that he was too young for when he was ten years old.

I'll put those words in his mouth, and he certainly won't mind, because that's how we work.

What I'm trying to say is that I got to experience the process of coping with the worst tragedy that can befall a person without experiencing the actual loss.

One of my favorite authors, Malcolm Gladwell, in his newest book, David and Goliath, recently wrote a full chapter on how a hugely disproportionate amount of American presidents and British prime ministers lost one or both parents at an early age. Barack Obama, Winston Churchill, Bill Clinton, Andrew Jackson are all prescient examples.

The "desirable disadvantage," as Gladwell calls it, is that, by experiencing the loss of a parent at an early age, the child has already experienced the worst imaginable tragedy. Thereby, whether by necessity or by choice, they emerge as the family leader, and they emerge stronger.

They become the antibiotic-resistant bacteria.

They become the reinforced castle.

They become the first sapling to grow after a devastating forest fire. The first tree in what will be a mighty forest.

And while I was 19 or so when my father fell ill, I got to experience all the "desirable disadvantages" of losing a parent: the trials of taking charge of University of Chicago doctors' appointments, the regimentation that it takes to send my 10-year-old brother to school, the fear that creeps in when yet another caring, consoling, life-long family friend and neighbor asks, "How's your dad doing?" and, because you have reached a breaking point in how much non-family members can actually care, you respond, almost brokenly, "Not good. He's dying," causing that neighbor to drive away in tears.

I got to experience the pain that makes a person stronger without experiencing the unending loss.

So, what if I had experienced that loss?

What if my dad had died?

There is no telling where I would be.

The dramatic part of me wants to say I would be finishing a tour of duty in either the Air Force or Coast Guard. Hypothetically, I would have enlisted in one of those two branches because I would not have wanted to hold a weapon with the intention of killing someone, and, more importantly, because my dad would not have been there to reason with me and talk me out of it.

Most likely, I would have continued to work at Fasel's Garden Center, in Oak Lawn, Illinois, taking more classes at Moraine Valley Community College. Maybe my area of interest would have changed.

Maybe I would have eventually gone into medicine, as Jim did, a career choice I attribute directly to his father's early passing. In fact, I think at this very moment he is working his first ever overnight shift as a respiratory therapist at a local children's hospital. That's where he ended up.

I envision a ghost of who I am, moving in a different world, ready to take control of who I am now. I struggle with that person I could have become, even though he ever existed and he never will.

So I sit here, writing, because I see the people who had to deal with that loss, and I am simultaneously wrestling with that nonexistent shadow of who I would have been.

I want to share my experience with those who've lost, because my story is similar in the pain but different in the outcome. Acquaintances, coworkers, friends...I want to comfort them, and I want to be able to share in their emotions when they say, "Oh, my father passed away…" I want to say it, too.

And sometimes, I almost do. I sympathize with them in every part of the process of caring for a dying parent, except for the death.

One part of my father's eulogy that I still can share is how I would have ended it. My father always takes great care to share the same interests as us kids, Andrea, Nick and I, and one of the artists that we all love is Florence Welch of Florence and the Machine.

If you haven't heard her, Florence has the most angelic voice in modern music. Couple that with the fact that most her lyrics have to do with death, and her music is perfect for the scene I am setting.

I don't know what I would have said for the speech of my eulogy. I would have very likely included the time my dad and I were at the 2006 NFC Championship game against the New Orleans Saints, the biggest game I had ever been to and the only thing I had thought about for weeks, and I would have described how my dad went out of his way to return several hundred dollars worth of cash to a drunken Saints fan. I would have applauded him for his ability to be in the fray and above it at the same time, doing the right thing in spite of everything. Maybe I would have. Maybe.

Maybe I wouldn't have said that. I don't know. There are many things I do not know, but I know this. At the end, to capture the beauty and bittersweet nature of death, I would have played "Shake It Out" by Florence and The Machine. Had my dad died, I would have put together some words, done my best to deliver them, and then, as I walked away from my father's casket, I would have clicked play on a sound system and this song would have played very loudly.

And then I would have cried for a very, very long time.

I would probably still be crying today, 1,710 days after the day my dad should have died.

So today, I get rid of that guilt. I close that chapter. I stop wondering, as I did at the Glamann's house in the NBC video, "…Where we… Where I would have been if my dad had died."

The "maybes" and the "would haves" disappear.

Because, as Florence bellows, "It's hard to dance, with a devil on your back. So shake it off. If I had the chance, would I take any of it back?"

I would not take it back. Not any of it. No way.

And now, the devil is off my back, so let's all dance. Let's dance, each and every single one of us.