Talking It Out: Helping Doctors Have Difficult Conversations

Talking It Out: Helping Doctors Have Difficult Conversations

For most physicians, it is easy to make recommendations that can cure cancer or other diseases: surgery to remove a tumor or antibiotics to fight off pneumonia. But what happens in those situations where there are no more treatment options, or a recommendation is needed but all the options carry significant risk?

While it is never easy to have a conversation with a patient going through a serious and sometimes terminal illness, palliative care physicians and providers do so every day. To help them, UW holds its annual PalliTALK, a theater-based simulation workshop designed to help providers improve how they communicate difficult news.

Learning How to Communicate Difficult News 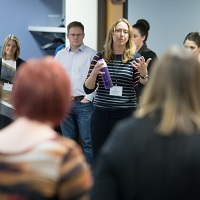 For much of the workshop, participants are divided into small groups and coached by palliative care physicians. The participant identifies areas of care on which they feel they need to work. Then, professional actors are brought in to act as patients, with each actor being given a character and a health condition. The scenarios range from one-on-one conversations with a patient to shared decision making with family members. In one session, the participants work through transitions, such as when there are no more treatment options and the recommendation is to transition to hospice care.

A session held in late October 2016 was the sixth annual UW PalliTALK workshop. To meet demand, the workshop was split into two sessions: one for palliative care fellows and one for other providers, such as physicians, nurses or social workers who routinely have these serious conversations. The 45 participants primarily came from regional medical centers such as the Mayo Clinic, the University of Minnesota or Northwestern University.

Liesbeth Tryzelaar, MD, a palliative care fellow from Northwestern Memorial Hospital, said she liked the idea of participating in the workshop because it would help her to master a skill she is already doing every day, though she admits she was a little nervous before attending the workshop.

“I thought it was going to be scary and intimidating to act out situations in front of my colleagues, but it is such a supportive environment here,” Tryzelaar said. “A program like this provides a structured learning environment where, in a very safe way, you learn the skills to take what you have been doing thoughtlessly to the next level.”

Added Campbell, “The routine feedback we get from faculty at the fellows’ and providers’ home institutions is that it unquestionably transforms them, and they returned more skilled than they were before.”