SwedishAmerican: A Division of UW Health

"Dr. Gorski has been an incredible CEO for SwedishAmerican focusing on quality healthcare, greater access, and community service and need," says SwedishAmerican Board Chairman Dan Ross. "I have been impressed with Dr. Gorski's steady demeanor and vast knowledge and understanding of healthcare and its many stakeholders as he has led Swedes to great achievement in a time of dynamic change. In addition, he has built a deep and broad management team who are ready and able to succeed him."

Dr. Gorski and his wife Sue moved to Rockford in 1977, as he began his residency in family practice at the University of Illinois College of Medicine-Rockford. Upon completion of his residency, Dr. Gorski joined the Five Points Family Medicine practice where he served thousands of patients over the next 20 years.

Five Points was one of the original practices that came together to create the SwedishAmerican Medical Group in 1994, and Dr. Gorski was named the Medical Group's first president, serving in that role from 1994-2001. He later served concurrently as SwedishAmerican's Chief Medical Officer in 2000 and 2001. He was named CEO in 2001, following Dr. Bob Klint. 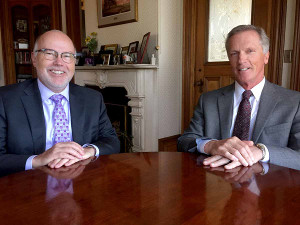 "It has been the honor of my professional life to serve as the President and CEO of SwedishAmerican Health System," Dr. Gorski said. "Together we have built the largest and most preferred health system in our region. Most importantly, we have done so while always remaining true to our mission, vision and values, and in so doing honoring the trust that our patients place in us."

The acquisition and renovation of a community hospital medical center in Belvidere with a focus on cost effective ambulatory services, and 24-hour emergency care started serving patients in 2010. The SwedishAmerican Regional Cancer Center opened in 2013 in conjunction with the internationally recognized UW Health and served as a catalyst for SwedishAmerican's merger with UW Health in 2015. In addition, major outpatient facilities, physician offices, and home health care were provided in communities across Winnebago, Boone and Ogle Counties.

During Dr. Gorski's tenure, SwedishAmerican continued neighborhood redevelopment through fund raising and project coordination by its Foundation. Twenty-six new homes have been constructed, and another 120 houses and two apartment buildings have been renovated in the hospital neighborhood. This past year, SwedishAmerican and its Foundation rehabbed and opened a Strong Neighborhood House in conjunction with Rockford Police Department and in cooperation with local agencies including the United Way.

A frequent public speaker, Dr. Gorski is currently on the Transform Rockford Steering committee, a member of the Board of Alignment Rockford, member of the Rockford Area Economic Development Council, past chairman of the Rockford Health Council, as well as a member of numerous community boards. He has chaired successful local fund raising campaigns for Rockford Public Schools, United Way, and Rock Valley College Foundation.

He and his wife, Sue, have been married 44 years. They have four adult children and three grandchildren with a fourth on the way. They plan to remain in Rockford as Dr. Gorski will provide consulting assistance to incoming President and CEO Dr. Born and the SwedishAmerican and UW Boards on special projects, as well as remain active in the community.