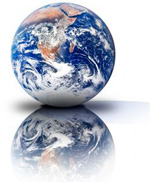 MADISON – The stated purpose of the third annual "Green Medicine: Healthy People, Healthy Planet" conference at Monona Terrace and Convention Center was to save the world.

Saving the world may have seemed an outlandish goal for a two-day conference in a mid-sized Wisconsin city. But keynote speaker Dr. Karl-Henrik Robèrt and his explanation of "The Natural Step," a science-based framework to help organizations, individuals and communities move toward sustainability, revealed this ambitious project to be realistic.

Dr. Robèrt, a cancer physician who headed a university hospital department in Stockholm, Sweden, has said the epiphany that gave birth to The Natural Step came from studying cancer cells.

In an interview in YES! Magazine, Robèrt explained his breakthrough.

"It hit me that cells are the unifying unit of all living things," he said. "I had a feeling that a broad understanding of these cells might help us reach a consensus on the basic requirements for the continuation of life."

That inspiration led to a thesis, which Dr. Robèrt sardonically described as "a beautiful consensus document with myself."

He sent it out to 50 friends in the academic and scientific communities, who responded with a river of red ink. But Dr. Robèrt was encouraged rather than dissuaded, because his initial document had engaged them sufficiently to elicit their criticism. Twenty-one revisions followed before a consensus was reached, and The Natural Step was born.

In essence, The Natural Step advocates a system-wide approach to sustainability, which Dr. Robèrt said is "not some kind of value statement. It's very precise. Life can go on. That's what it means."

Sustainability is threatened broadly by human intervention that interferes with and contradicts naturally efficient processes that have evolved on this planet from its inception. Waste, expressed in manifold forms, builds and life becomes untenable.

Human beings have proven adept at unsustainable practices, and threaten sustainability by clogging up natural systems with unnatural pollutants. With waste it should be a zero-sum game, and in nature it has been for billions of years. But many human practices (plastic and greenhouse gases are commonly mentioned) create waste without accounting for its proper disposal. This upsets the balance The Natural Step seeks to restore.

And destruction is not confined to the tangible world. Corrupt systems undermine humanity psychologically, as well.

"We can systematically erode the trust of people by assuring their needs are not being met," Dr. Robèrt said.

In response, The Natural Step examines "the bigger picture" and draws conclusions according to a framework that studies our increasingly complex systems and seeks solutions that do not violate a functional system's natural conditions.

"We don't need to engineer the system," Dr. Robèrt said. "It designed itself over the last 3.5 billion years."

Dr. Robèrt pointed to three "magic questions" that must be successfully answered to ensure sustainability:

Decisions should not be made until satisfactory answers to those three questions have been reached. And, since all three questions point toward sustainability, decisions based on those answers will invoke sustainable solutions.

Dr. Robèrt has found that when solutions do come, they tend to come in droves.

"There are so many solutions that solve many problems at the same time," he said. "Some people call it the solution multiplier."

At first blush The Natural Step can seem strictly theoretical, but its tenets are being put into practice by a number of businesses and governments, including Madison's. Mayor Dave Cieslewicz, who introduced Dr. Robèrt at the conference, is a Natural Step supporter and has challenged all city employees to come up with ways to increase sustainability in their daily professional lives.

"It's about integrating environmental ethics in everything we do as a community," Cieslewicz said.

As Dr. Robèrt may have predicted, ideas have been plentiful. They include a commuting-incentive program that encourages employees to commute via carpool, transit and bicycle; the use of green cleaning supplies and services; and identifying and implementing cost-saving opportunities in the city's public housing.

Mayor Cieslewicz's favorite, he said, was likely the simplest. The Madison Metro Transit System's fleet of 270 buses is stored in a large garage on East Washington Avenue, and that garage is also where daily bus maintenance takes place. The problem was heat waste, because the part of the garage where buses are kept when not in service did not need to be as warm as the area where staff performed maintenance.

How can we solve this intractable dilemma, the mayor wondered. He put the question to the Metro staff.

Their answer? Put in a door.

It's a simple solution but one that cost only $70,000 and will pay for itself within a year. For Madison, it's a natural step in the direction of sustainability.