Sleep: Spring Cleaning for the Brain?

Sleep: Spring Cleaning for the Brain?

Center for Sleep and Consciousness 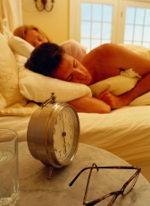 If you've ever been sleep-deprived, you most likely have had the feeling that your brain is full of wool.

There is now molecular and structural evidence of that woolly feeling. Researchers have discovered that proteins build up in the brains of sleep-deprived fruit flies and drop to lower levels in the brains of the well-rested. The proteins are located in the synapses, those specialized parts of neurons that allow brain cells to communicate with other neurons.

For sleep researchers at the UW School of Medicine and Public Health (UW SMPH), this evidence supports their theory of "synaptic homeostasis" - the idea that synapses grow stronger when we are awake, learning and adapting to an ever-changing environment.

Sleep refreshes the brain by bringing those synapses back to a lower level of strength. This “downtime” is important because larger synapses consume a lot of energy, occupy more space and require more supplies, including the proteins examined in this study.

Sleep - by allowing synaptic downscaling - saves energy, space and material, and clears away unnecessary "noise" from the previous day, the researchers believe. The fresh brain is then ready to learn again in the morning.

The researchers - Chiara Cirelli, MD, PhD; Giorgio Gilestro, and PhD; Giulio Tononi, MD, PhD; of the Center for Sleep and Consciousness - found that levels of proteins that carry messages in the synapses (or junctions) between neurons drop by 30 to 40 percent during sleep.

"We know that sleep is necessary for our brain to function properly, to learn new things every day, and also, in some cases, to consolidate the memory of what we learned during the day," says Cirelli, associate professor of psychiatry. "During sleep, we think that most, if not all, synapses are downscaled. At the end of sleep, the strongest synapses shrink, while the weakest synapses may even disappear."

Higher levels of synaptic proteins during waking may be evidence of random experiences that fill the brain every day and need to be dissipated to make room for the learning and memories that are truly significant.

"Much of what we learn in a day, we don't really need to remember," Cirelli says. "If you've used up all the space, it becomes increasingly difficult to learn more before sleep helps you clean out the junk that is filling up your brain." 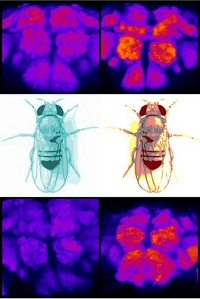 In these images, the brain of the well-rested blue fly on the left side has low levels of a synaptic protein called BRP in this 3D view from a confocal mircoscope.

On the right, the brain of the sleep-deprived fly glows orange in areas of BRP concentration. (Bruchpilot or BRP is a protein involved in communication between neurons.)

In the tired fly, the protein is present at high concentartions in three major areas of the fly’s brain that are associated with learning. Sleep reduces the levels of this protein, an indication that synapses get smaller and/or weaker.

This process of "downscaling" may be important so the brain is reset to normal levels of synaptic activity and can begin learning again the next day.