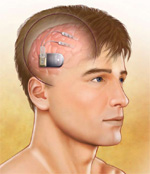 MADISON - In 400 BC, Hippocrates recommended diet and medicine to control the seizures his contemporaries called "The Sacred Disease." That combination would prove the prevailing treatment for epilepsy for more than 2,000 years.

Today, the two to three million Americans with epilepsy have a range of treatment possibilities for their disease. After meeting with an epileptologist, six in ten will respond well to modern medications. For those who do not, a range of neurosurgical options offers the possibility of greater quality of life.

The newest addition to that range of surgical options? NeuroPace.

"This is an early device in what is sure to be a long history of brain pacemakers for epilepsy," says UW Health functional neurosurgeon Karl Sillay, MD. "Though it is still in adult clinical trials without long-term follow-up, there have been early reports of some patients achieving seizure-freedom."

NeuroPace is an implant that provides responsive neural stimulation (RNS) to a person's brain upon detecting an impending seizure via electrodes in or on the brain's surface. This device differs from the currently FDA approved vagal nerve stimulator technology, which provides programmed stimulation to the vagus nerve outside the brain without the ability to detect seizure activity.

According to UW Health epileptologist Raj Sheth, MD, RNS has the potential to make a significant difference for patients who have failed to respond to medication and for whom epilepsy resective surgery is not an option.

Slightly longer than a person's thumb, but only half as thick, the NeuroPace device is surgically implanted directly in a person's skull, with electrodes placed in critical parts of the brain. When the device detects EEG activity that indicates a seizure, it emits an electrical pulse to stop the seizure before it can start.

Between 60 and 100 patients nationally have so far entered a double-blind clinical trial for NeuroPace. UW Hospital and Clinics is the only site in the state of Wisconsin participating in this national study, and already has placed one implant, with several more under consideration.

While all patients have the device surgically implanted, some will have their devices activated and others will not during the trial.

The clinical trial is not open to children. To be considered, patients must: