Q and A with Dr. Rama Maganti: Death Risk in Epilepsy

Q and A with Dr. Rama Maganti: Death Risk in Epilepsy 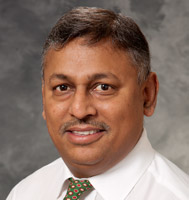 A new study in JAMA Neurology has some rather alarming statistics that show that people with epilepsy are at a much higher risk of dying prematurely.

The study looked at "unnatural mortality" in more than 50,000 people with epilepsy in England and Wales. Dr. Rama Maganti, a researcher and clinician in UW Health's Comprehensive Epilepsy Program, offers his thoughts on the study.

How much of this is attributed to Sudden Unexpected Death in Epilepsy or SUDEP?

SUDEP, which is usually thought to be related to seizures causing heart or breathing problems, especially during sleep, accounts for less than half of all unnatural deaths. So while SUDEP is a risk, this study looked at other causes of death. It found a three times higher risk of unintentional death and a five times higher risk of overdosing - either intentionally or accidentally, often on opioids and psychotropic medicines but not usually on epilepsy medications. Other causes of death include seizure-induced drowning, falls and other accidents.

Were you surprised by the results?

Sadly, the results are not surprising. As an editorial accompanying the article pointed out, people with epilepsy often must contend with other related psychiatric problems, which we call co-morbidities, that can include depression, memory problems, and substance abuse disorders. These can make it difficult for patients to adhere to their treatment to keep seizures under control.

What can families do to keep people with epilepsy safe?

Families need to be aware that epilepsy can be associated with increased mortality. Closely monitoring their treatment with their physician is important. It also highlights that epilepsy is associated commonly with suicidality, which needs to be monitored closely.