Preserving Dignity for Loved Ones with Alzheimer's

Preserving Dignity for Loved Ones with Alzheimer's

Tips for Caregivers: Caring for a Person with Alzheimer's Disease

When Is It Time for Home Healthcare? 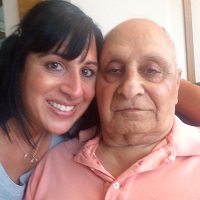 Naveena Jaspal remembers her father's blank stares when store clerks would chirp, "Have a nice day!" and his normally calm, pleasant demeanor turning to anger when a neurologist declared that his condition had gotten significantly worse.

Alzheimer's disease, Parkinson's disease and aphasia have taken a toll on her 79-year-old father, and Jaspal is committed to doing everything she can to make every interaction a positive one.

"For me, it's all about preserving his dignity and advocating for him," says Jaspal, who also works in development relations, marketing and finance for the Wisconsin Alzheimer's Institute at the University of Wisconsin School of Medicine and Public Health. "He was such a sweet, amazing father, and every day he has on this earth I want to be special."

Jaspal shares these tips for other caregivers whose loved ones have Alzheimer's or other dementias:

Don't Talk as if They Weren't There

Jaspal cringed after a relative said, right in front of her father, "He recognized me!" "Even if they seem kind of distant, they understand and can hear everything you're saying," Jaspal says. "It's really important to protect and preserve their dignity."

Hand Out "Please Be Patient" Cards

Interactions with a waiter, flight attendant, store clerk or new doctor can be awkward if your loved one seems rude, indecisive or confused, but it can be embarrassing for your loved one if you have to explain the reason for his or her behavior aloud.

You can make life easier for everyone involved if you instead discreetly present a card that reads, "Please be patient. The person with me has Alzheimer's disease and may need extra time and consideration." You can download and print the cards from the Alzheimer's Institute's website.

Strive for Patience Yourself

It can be devastating to watch your parent or spouse deteriorate, and you might feel frustrated when your loved one is unable to do something or asks the same thing over and over again. "Be patient. Whatever frustration I was feeling with my dad, I tried to remember that my dad was feeling tenfold," Jaspal says.

Talk slowly and give your loved one time to process what you're saying. Also, avoid the words "Do you remember…" or "Do you know who this is?" "That just makes them feel worse," Jaspal adds.

Help for the Holidays

The holidays can be a particularly stressful time for individuals with Alzheimer's. Find tips to help

Make sure your loved one's environment is clean and clutter-free, with belongings and utensils in consistent, predictable places.

Look for the Joy

What makes your loved one happy? It can be the little things — Jaspal's father has a soft spot for yams and salted caramel gelato, and so she makes sure he gets his favorite treats regularly.

"He barely has anything that gives him pleasure so whatever I can do to make him smile or laugh, it's worth it," she says.

She also made him a scrapbook with photos and mementos from his childhood, wedding and other treasured times. "Long-term memories are stronger than short-term memories, and it brings him joy to look at these old pictures," she says.

Tap the Power of Music

Patients who are unable to talk may still be able to sing and recall favorite tunes. Jaspal created a playlist of her father's favorite Indian songs from the 1950s and 1960s and plays it for him often.

"Music is so incredibly therapeutic for people," she says. In fact, singing can be so powerful that the Wisconsin Alzheimer's Institute started The Amazing Grace Chorus for patients with Alzheimer's in Milwaukee.

"Giving them things to do makes them still feel important," Jaspal explains.

Ask your loved one to help with simple household tasks such as folding laundry (avoid any activities that could be dangerous). Jaspal also encouraged her father to play online brain games such as Luminosity (until it became too frustrating as his condition progressed) and prints out pictures of cartoon characters so he can draw them.

Know When to be Quiet

"If someone with Alzheimer's seems kind of agitated, try being quiet and not talking because all that extra sound is like chaos in their brain," Jaspal says. If you're in an overstimulating environment, move your loved one to a quieter setting.

"It's all about finding the right fit," she says. "For family members, you want to develop a good rapport with the doctor so you can communicate ahead of time." Jaspal asks doctors to speak generally about her father's symptoms instead of mentioning disease names, which might frighten him.

The Wisconsin Alzheimer's Institute offers a wealth of other resources for caregivers, with tips on everything from coping with a new diagnosis to daily care to home safety. Learn more at wai.wisc.edu.