This May we’re celebrating Stroke Month at UW Health with some good news.

Recent changes in American Stroke Association (ASA) stroke guidelines have led to real changes in how many people can be treated with brain-saving procedures.

Since the rules went into effect in February, UW Health has seen a doubling of the number of stroke patients each month who are eligible for a procedure called thrombectomy. In these procedures, endovascular neurosurgeons thread a device through blood vessels into the brain and mechanically remove blood clots, restoring blood circulation to the brain.

The American Stroke Association announced in early 2018 that two large studies showed that some patients will benefit from thrombectomy up to 24 hours following a stroke. Previously, the “treatment window” for this endovascular therapy was six hours.

Dr. Azam Ahmed, who led UW Health Comprehensive Stroke Center’s arm of the DEFUSE 3 trial, said the results were so good that the study ended early.

“This is tremendous news for patients, and means that we can now treat people who wake up with strokes,’’ he says. “Previously, because we did not know when their stroke began, we could not treat people and attempt to save them from death and disability.”

One of Dr. Ahmed’s patients in February, just after the rules changed, shows just how well some people can do after one of these procedures. 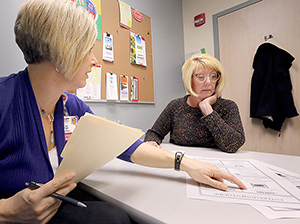 Jill Wittwer, of Belleville, had just returned from a Hawaiian vacation, and her husband, Kent, assumed exhaustion was why she was sleeping unusually late. But a few hours later, he became concerned when he was unable to wake her. He called his sister Faith Wittwer, who had just retired as a nurse at UnityPoint-Meriter Hospital. She told him to hang up and call 911.

He is so glad he did.

Even though it could have been as long as 12 hours since her stroke began, perfusion imaging of her brain showed there was still some circulation to the area with the clot, and Wittwer and his sister made the decision to go ahead and operate.

“My sister, being the nurse, tried to prepare me that this may not work,’’ he recalled. “But when Jill woke up after surgery, she knew me, she knew my son, and she called us by name, and then fell back asleep. I knew then that she was going to be okay.”

“Everyone took such good care of us, and I mean everyone, from the medical assistants to the housekeeping crew to the people who brought your food,’’ Kent Wittwer said. The family also benefited from some of the new technology. Dr. Jamie Elliott, a stroke neurologist, presented the case using images on the screen in Jill’s room so the Wittwer family could understand all that had happened.

Two months out, Jill Wittwer is doing well, and going to therapy for vision and speech therapy. She’s looking forward to returning to work at UW Health’s Research Park Clinic, where she is a medical assistant in Sports Medicine.

“The message remains the same -- time is of the essence in stroke treatment, and time lost equals brain lost,’’ says Chris Whelley, a nurse practitioner who coordinates the UW stroke program. More than 690,000 Americans will have a stroke due to a blood clot this year; stroke is the number-five cause of death in the United States.

The first-line treatment remains alteplase, a clot-dissolving drug that must be given within 4.5 hours of the onset of a stroke. Only some patients can benefit from the longer treatment window; a perfusion image of the brain is necessary to determine if the brain tissue is still alive and could recover if the clot is removed by thrombectomy.

Because these technologies such as endovascular neurosurgery and perfusion imaging are only available at larger and more comprehensive medical centers, the American Stroke Association also recommended setting up regional systems of care so patients in rural areas can more quickly receive the best care.

The UW set up the first telestroke network in Wisconsin in 2009 so patients at smaller hospitals without neurologists on staff can be quickly evaluated via high-speed internet connections. The UW stroke neurologists can advise whether the patient should be treated at the partner hospital with the clot-dissolving medicine, or whether they should be transported to UW for more advanced care.