MADISON - As the American Family Children's Hospital approaches its first birthday in August, final preparations will be taking place on a brand new Pediatric Surgical Services Unit scheduled to open in late September. Consisting of six operating rooms, two procedure rooms, a 30-bed pre/post operative unit and a 10-bed post-anesthesia care unit, this enhancement to American Family Children's represents a major milestone for pediatric surgery in south-central Wisconsin.
"One of the most stressful experiences parents can have is when their child goes in for surgery," says Dennis P. Lund, MD, surgeon-in-chief at American Family Children's Hospital.
"This new space will be a great step forward toward easing those anxieties. Today, children and adults share the same operating room space. Once we open the pediatric operating rooms in September, children—and only children—will undergo surgery in our brand new space on the third floor of the Children's Hospital. The look, the feel and the mood of the space will be much calmer and more child-friendly than what we currently have. So, not only will we have doctors, nurses and staff who are specially trained to take care of children, but we supplement that with a beautiful surgical space designed just for children and their families." 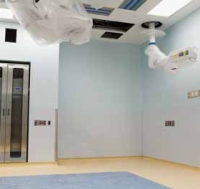 With the first pediatric surgery scheduled for September 22, the $21 million project—funded by hospital bonding and private fundraising—is built upon a "high tech, high touch" foundation.
"These operating rooms are much larger to accommodate the state-of-the-art video and robotic equipment we use today," Lund says. "At the same time, the aesthetics provide a much warmer and calmer feel that is more appropriate for families with children. This all helps reduce stress for parents, allowing them to focus more positive energy on their child."
Lund also says the new operating rooms may enhance the hospital's ability to attract patients from longer distances.
"Before we opened the American Family Children's Hospital last summer, not many people even knew we had a children's hospital in Madison. This new hospital has given us an identity that is starting to penetrate across the state as more people see what we have to offer children and their families."
Pictured right is one of the new operating rooms. Pictured top is an anchor floor design that is part of the "Lake Michigan" theme of the new Pediatric Surgical Services Unit on the third floor of the American Family Children's Hospital.
Date Published: 09/12/2008