Madison, Wisconsin - Alysia Hanson insists she is just a regular mom. But not every mother donates one of her kidneys to her four-year-old son to save his life.

"I really feel it's what any mom would do in my situation," said Hanson, who is a nurse care team leader on a very busy trauma unit at UW Hospital.

Her son Braxton came into this world on October 24, 2010. In his short time on this earth he's seen more than most ever will in a lifetime.

While vacationing in the Wisconsin Dells at just 26 weeks pregnant, Hanson went into labor. Braxton weighed just one pound, four ounces when he was born. He spent almost the first year of his life UW Health's American Family Children's Hospital.

Alysia and her husband Ken were living in Green Bay at the time. After driving nearly six hours round trip to see their son, they moved to Waunakee. Alysia was hired as a nurse at UW Hospital. Ken, Alysia's high school sweetheart at DePere High School, decided to work from home so one of the parents would always be available for Braxton. Alysia works three 12-hour days at the hospital. 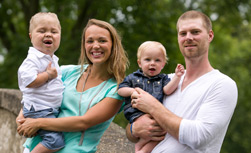 The family wanted to be in the Madison area so Braxton could continue to receive the best care possible from the doctors at American Family Children's Hospital.

Braxton faced many ups and downs with countless doctors' appointments, therapies, surgeries and critical decisions about his care. He was on a ventilator until he was almost four years old and he could not speak, so the family learned sign language to communicate. He also needed a kidney.

"You never think this can happen to you when you want to start a family. The first years of his life he spent all of his energy just trying to breathe and stay alive," said Hanson.

The Hansons welcomed another boy, Blake, in summer 2014. But before little brother turned one, it was clear Braxton needed a kidney. Alysia was a match and on May 27, 2015 she donated a kidney to save her son's life.

"There was no hesitation. I could help and any mom would do what I did. The procedure was a success. He is off dialysis and is doing really well," said Hanson. "Just a few months ago he said his first words and that was the greatest day of my life. That was the best feeling to hear him speak."

"I cannot say enough about how amazing UW Hospital has been to my family. Not only the care they have given my son, but they hired me. My co-workers and supervisors are incredible," said Hanson. "Not every workplace would be this accommodating to my family's situation. We never thought we would leave Green Bay, but now we are so happy with my job and our sons in the Madison area."

Co-workers say she is an active leader on the unit and always has the best attitude and her personal life makes her even better with patients. She is a true professional.

"My grandfather battled cancer when I was growing up and I saw the great care he received from some nurses and I thought I want to help others like that, so I became a nurse," said Hanson.

While co-workers say her strength, courage and perseverance make her unit a better place, Alysia draws her strength from Braxton.

"I am so proud to be his mother and we are blessed to have Braxton. He has taught us so much," said Hanson. "We never take a day for granted and we really focus on what is important in life. The little things matter and we try not to sweat the small stuff."

Working Mother Magazine is the only publication dedicated to working parents.