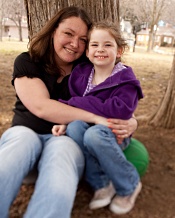 Madison, Wisconsin - Kidney disease isn't just an illness that affects adults or the elderly. In the United States, more than 1,000 children are awaiting life saving kidney transplants, 17 in Wisconsin today.

This fact became a startling reality for the Koenig family of Buffalo City, Wisconsin, after a routine trip to the pediatrician.

When Penny and Jason Koenig brought their daughter Laina to her six-month check-up, the news they received about their baby shocked them. During the examination, the pediatrician noticed swelling in Laina's abdominal area. An ultrasound soon revealed that Laina had polycystic kidney disease (PKD), which is an inherited renal disorder characterized by the presence of multiple cysts on the kidney. 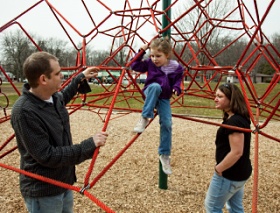 In patients with PKD, normal kidney tissue is replaced by fluid-filled sacs or cysts of varying sizes that become larger as the disease progresses. Often abnormally high blood pressure (hypertension) and the progressive loss of kidney function, leading to end-stage renal failure are associated with the disease.

Laina's mother Penny explains that although she and Jason were shocked by the initial diagnosis, they were thankful that Laina fared quite well with the use of medication up until her second birthday. Then her energy level began to dip as Laina began to experience the symptoms of kidney disease.

Throughout the rest of her toddler and early childhood years, Laina was tired and inactive, and not at all able to enjoy the experiences common to young healthy children. When Laina turned five and was entering end-stage renal failure, the family began planning for a kidney transplant. Both Laina's parents and her maternal grandmother were tested. Her mom, Penny, was a match, and on March 4, 2010, Laina received her mother's kidney.

As Laina recovered, her parents saw a gradual change in their daughter's energy level - as she went from tired to having the energy of a typical 5-year-old girl. Now, Penny says, "She has twice the energy as before and has grown so much that she's literally gone through full sizes of clothing!" 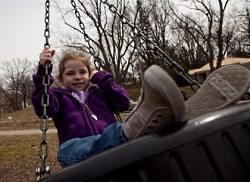 Laina now has the energy to live the busy and fun life of a healthy kindergartner. She's even learned how to ride her bike, and plans to take her training wheels off this summer.

A change in Jason's insurance landed the family at UW Hospital, a three-plus-hour drive from their home in Buffalo City, but they were very pleased with the move. Penny and Jason are so appreciative of the compassionate care they received from the entire hospital staff. Now, more than a year after her transplant, Laina is like most typical 6-year-olds.

And though she still doesn't like to take her medications, she doesn't mind the trips back to Madison for her scheduled check-ups. These visits often include a trip to the zoo and a stop for ice-cream - simple experiences that Laina now has the good health and energy to enjoy.