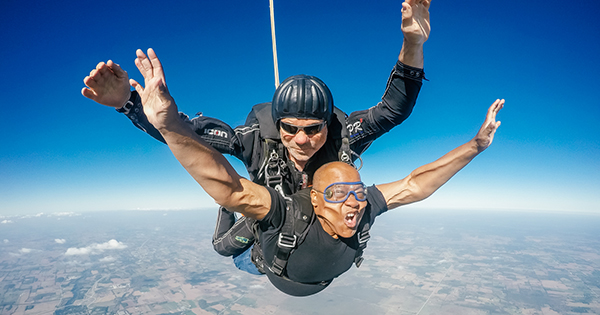 Vince Alexander is blind, and fearless.

The second quality helps explain how he found himself jumping out of an airplane into the sky above Jefferson County on a beautiful September Saturday, a few days before his 55th birthday.

It probably also helped him survive a life that has had more twists and turns than a Gothic novel.

Alexander was born in Arkansas, but moved to Madison as a young child, a pattern that would repeat during his life. He went to elementary and middle school at Franklin and Lincoln schools in Madison, then returned to high school in Arkansas. Later he would return to Wisconsin for technical college.

Along the way, he had three sons in Arkansas, and two much younger daughters in Wisconsin. And he made some bad choices.

“I was living life in the fast lane for too long,’’ he says. “I’ve been stabbed, I’ve been shot. And I spent time in prison.”

He also began losing his eyesight to glaucoma in his 30s, and a brain aneurysm in 1999 all but finished off his eyesight. He can still detect some light in his left eye. But that was around the time that his life began to improve.

“When I had my two daughters, I really wanted to turn my life around,’’ he says.

In 2014, he had some symptoms of prostate cancer, but a checkup did not show anything. At Easter 2015, he returned to Arkansas to say goodbye to his beloved grandmother Mamie.

“She loved all her grandchildren, but I was her favorite,’’ he says. “Everyone said she was waiting for me before she could go.”

On that visit, his symptoms worsened and he was diagnosed with advanced prostate cancer. He began chemotherapy, and at first responded well to it. But in 2017, blood in his urine was the signal that the cancer had spread to his bladder.

“My doctor said he had done all that he can do, and he told me that I should check into hospice,’’ Alexander says.

But he wasn’t ready to say goodbye, and neither was his family.

“My sister bought me a one-way airline ticket to come up here,’’ says Alexander, “It was the first time I was ever on an airplane.”

He came to the UW Carbone Cancer Center for treatment of his stage four prostate cancer, which had spread to his lymph nodes.

He’s found a new family here, he says, saying he thanks God for his team, which includes Drs. Josh Lang and Mark Ritter, Chaplain Kirsten Worzala Dumke, and Chessa Fischer, a nurse practitioner who helps manage his pain.

Alexander had a rough spell in July, spending nearly the entire month in the hospital.

But he still radiates a love of life. On a visit in late August, he was chatting with Ken Kirkpatrick, a UW Health guest services ambassador, who was escorting him to appointments. Kirkpatrick told Alexander about his recent skydiving adventures.

“I said, I’ve always wanted to do that once in my lifetime,’’ Alexander says.

And so Kirkpatrick made arrangements for the two of them to go skydiving at the Wisconsin Skydiving Center near Fort Atkinson.

The day was sunny and warm, and the jump was a thrill. On the way home, Alexander called relative after relative to tell them all about it.

He doesn’t call it a bucket list item, but more a part of living every moment he has.

“Everyone’s going to die,’’ he says. “It’s God’s will when he wants me to come home. I’m here today and that’s what matters.”