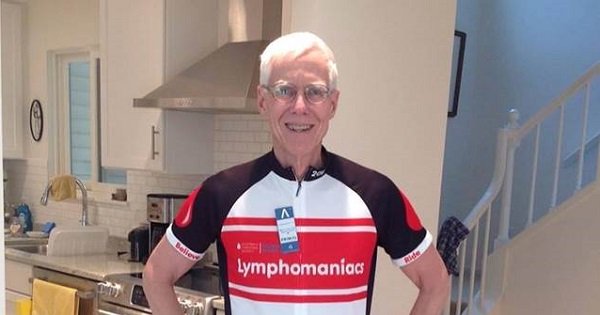 Roy Meyer isn’t the kind of guy to despair over bad luck, although he certainly has reason.

When he retired early from a career in the insurance business in Wausau, he and his wife Debbie moved to Madison, a city they learned to enjoy while visiting their son, Alex, when he was a UW-Madison engineering student.

But only months after moving, he was diagnosed at age 64 with a type of blood cancer called diffuse large B-cell lymphoma (DLBCL). So he found another reason to love Madison – it’s home to the UW Carbone Cancer Center.

His oncologist told him that without treatment, he had about a year to live. But his first-line treatment – a monoclonal antibody called rituximab coupled with four chemotherapy drugs – worked beautifully, sending his cancer into remission.

It also sent Meyer out onto the roads of Dane County. He joined a bike team called the Lymphomaniacs, which raises money for the Leukemia & Lymphoma Society with an annual 150 mile ride along Lake Michigan -- the Scenic Shore 150. He also raises money by participating in Carbone’s annual Race for Research, and reaches out to other patients through his roles as a Red Door Society member at Gilda’s Club and a peer counselor to other lymphoma patients through the Leukemia, Lymphoma Society First Connection program.

He sees giving back as necessary.

Rituximab was approved 20 years ago, and is now so important to cancer treatment that the World Health Organization has it on its list of essential medicines. But in the early ‘90s, it was an experimental drug that needed to be tested in clinical trials.

“I wouldn’t be here without rituximab, I owe all the patients who took part in the clinical trials for rituximab back then,’’ Meyer says. “It gave me a wonderful four years.”

During those years of remission, he was able to travel, attend his son’s wedding in Hawaii and his brother’s wedding in Connecticut while continuing his bicycling.

“There was only a 1 to 3 percent chance per year that it would transform into more aggressive cancer,” says Meyer, who reads everything he can find about his blood cancers and their treatments.

Unfortunately, his cancer underwent “Richter’s transformation,” which turns it back into the aggressive DLBCL. The second time around, DLBCL is much more difficult to treat, so he signed up for a UW Carbone clinical trial.

This study, run by Dr. Vaishalee Kenkre, is testing a regimen of current standard treatment for relapsed DLBCL-- a group of four drugs known by their initials as RICE -- to another treatment, which combines the RICE drugs with a new drug conjugate called denintuzmab mafodotin, which targets a protein on the cancer cell called CD19. The antibody sticks to the cancer cells, then delivers a dose of chemotherapy right to the cell.

Half the patients in the trial get RICE alone, the others get RICE plus the targeted antibody. Meyer was disappointed when he was randomly assigned to the half of the trial that did not get the new drug. Still he kept at it, spending three days in the hospital every three weeks for three cycles to infuse his RICE drugs.

A PET scan in late June and a bone marrow biopsy in July showed that the drugs are working. His next step may be a stem cell transplant. And, of course, he’s riding in the annual bike ride.

“We have surpassed our goal this year of raising $100,000 to have a research grant with our name on it,’’ he says.

“Clinical trials are the way we make progress. I really believe if you’re a cancer survivor, you owe it to the future generations of cancer patients. We succeed when we put our gratitude into action”.