From the Waiting Room to the Birthing Room

From the Waiting Room to the Birthing Room 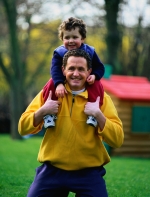 MADISON – Years ago, dads-to-be nervously paced the floor of hospital waiting rooms as they waited to hear that their child had been born.
But during those countless hours of waiting, many wrote down their feelings in journals known as "father's books" or "stork room jottings." Frequently left in waiting rooms in the 1940s and '50s, the journals provided an outlet for the apprehensive, often exasperated men.
Judith Leavitt, professor of medical history and bioethics at the University of Wisconsin-Madison, stumbled upon a stack of these books – an unknown resource for historians at the time - as she researched her second book on childbirth from a woman's perspective. When she read the honest and passionate accounts in the journals, she switched her focus.
The fathers described their general worries about fatherhood and their particular frustrations about not being able to be with their wives, who very much wanted them present as the women endured hours of painful labor and then the challenge of delivery.
"From these poignant accounts, it's very clear that the men did not want to be in the waiting rooms; they wanted to be with their wives, supporting and comforting them as they went through the entire process," says Leavitt, who teaches at the UW School of Medicine and Public Health.
She used the journals as an important source for her newest book Make Room for Daddy: The Journey from Waiting Room to Birthing Room (University of North Carolina Press), to be published this coming Father's Day.
Primarily from the father's point of view, the book describes the history that has brought us to today's very different childbirth practices.
"Most partners of birthing women today participate in labor and deliveries," Leavitt says. "They understand how joining together for this life-cycle event is central to the couple's relationship and family-building."
Many forces came into play to bring about the changes.
"During the 1950s, thanks mostly to the growing natural-childbirth trend, there was a hue and cry from laboring women that their husbands should be present," says Leavitt. "Men were also beginning to be outwardly vocal at this time, especially when their wives later told them they wanted them there so badly."
By the 1960s, several additional factors - the Lamaze birthing technique, the women's movement and fathers' increasing protests challenging exclusion policies - led most hospitals to admit men into the labor room.
"Fathers took classes with their wives, and learned how to coach them through breathing exercises," explains Leavitt. "So when the men were sent from the labor room back to the waiting room at the crucial moment, they started to fight harder to get into the delivery room."
Not until the 1970s - and in some hospitals, the 1980s - were the delivery room doors open to them. And when hospitals finally combined labor and delivery rooms into birthing rooms, the father's place became well-established.
But not for all of them, says Leavitt.
"Men's 'privilege' of being with their wives came first for paying white patients, then for paying black patients," she says. "There are still hospitals frequented by poor white and black women where men are not allowed to be present for labor or delivery."
The father's movement is very active today, says Leavitt, with many Web sites and books available for information on birthing. But some men are ambivalent about being present for the birth of their children, and they're expressing their angst.
"This is as big a transition for men as it is for women." Leavitt says. "Each man brings his own point of view to the process."
Hospitals are becoming more and more responsive to the diversity of men's expectations, she says. The increasing use of doulas - lay birth attendants who support the couple - is helping both men and women achieve their expectations.