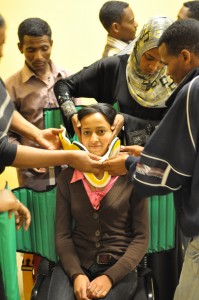 Today was the first day I started teaching the Ethiopian nurses.  Before the trip I had been asked to teach a few lectures on emergency medical services topics such as documentation and ambulance operations, and had prepared several lectures based on this and had prepared several others on EMS related topics in case they were needed.  Yesterday I found out that they wanted two 1-day classes and a skills training on some of the new equipment that had arrived Sunday at the training center.

Lucky I had enough lectures ready, I just needed to organize them and after working as an EMT for 6 years I knew the skills very well.   I organized the class into two parts of about 5 hours of lectures (9 different presentations in all) and about 2 hours of skill stations. We would go over C-collar placements, log rolling patients, placing on back boards, proper lifting techniques and using a Kendrick Extrication Device (KED).

The nurses I would be teaching were nurses who worked for the Addis Ababa fire brigade manning the fire brigade ambulances.  Each ambulance was staffed with 2 nurses and a driver.   The city’s EMS is very young, only about 7 months old.  There are several private ambulance services and the red cross operates a small service but this was the first organized EMS with a central communications system that tied into the city emergency call number 939 (the same as 911).

This day I was teaching 24 students.  I was somewhat nervous.  Teaching a group of students that I did not really know their knowledge level, culture or even language (all higher education is taught in English, but the official language is Amharci).  The lectures went fine. I did my best to try and engage them, but I found them shy. I also think that my Midwest accent didn’t help.  I did manage to get a few of them to talk during class and was surprised that a few of them speak English very well.

I learned that the fire brigade staffs 3 ambulances in the city.  That is 3 ambulances for a city of about 5 million, Madison has 8 ambulances for 250,000 people.  Even with this very large population they really did not do a large number of calls, usually only about 12 calls a day of all the ambulances combined. Most of the calls were for laboring mothers or traffic accidents.  They call them RTA (road traffic accident). Ethiopia has one of the highest RTA fatality rates in the world, and starting the fire brigade ambulances was an effort to reduce this.

In the afternoon were went over to the training center and started the skills stations. We did back board/log rolls/lifting, using the KED, and c-collar placement. Ryan and Bahilu each took a station and the students spent about 2 hours going through each station.  The students really came alive and seem to enjoy learning new skills.  Their shyness disappeared and became very talkative. They worked well as a team.

I found teaching the class one of the more satisfying things I have ever done professionally. I felt that I was really making an impact. What made it even better was that it was my birthday.

That night Girma and Ryan took me out to dinner on the Pizza, the commercial area of Addis. It was a wonderful dinner.