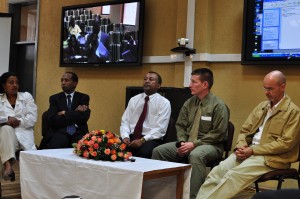 Ryan Wubben, MD also gave a lecture on the history of emergency medicine in the USA.  The problems it faced, which are many of the same issues the Ethiopians are facing, i.e., other departments worried about losing turf.  He explained that emergency medicine would not take away, but be able to give standardized  care and that other departments would be consulted about patients that are sick, and not the ones that were not.

Thus allowing other departments to focus on working in the clinics, in the OR etc.  Many of the other departments at Black lion hospital were at the symposium and there was a question and answer period afterward. I thought it went very well.

Following that was an open house of the new training center they just built.  When I was here in August it was just a empty shell of a room, now it’s built and looks great. The national health minister and the president of the AA university were there to tour. It was a really big deal and I was proud to part of it.

That night we had dinner with many of the nurses and MDs from the hospital. I talked at length with two nurses who had spent  October in Madison doing clinical observations at the UW. It was encouraging to talk about how much they had learned and how they were taking that and putting it into practice within their own ED. And not just from a clinical practice view but from other aspects as well, such as, stocking, human resources management, staffing, job descriptions, and administration practices.