Media Inquiries
news@uwhealth.org
UW Health Services
Infectious Diseases
Heidi Nass, an outreach specialist and patient advocate for UW Health's HIV/AIDS Comprehensive Care Program, is in Mexico City this week for the International AIDS Conference.
Read more: Addressing the World on HIV/AIDS
Nass is writing "blog"-like accounts from the conference for uwhealth.org. UW Health is pleased to provide a venue for Nass to share her experiences at the conference. The experiences and opinions she shares here are her own and may not represent UW Health's positions, strategies or opinions.
Return to homepage: Dispatches from the International AIDS Conference in Mexico
Day 2: Sunday, August 3, 2008
Badge Troubles, "Youth Power"

So, here's the thing – just because the UN is internationally recognized and respected doesn't mean it's going to have a perfect system for, let's say, conference badge pick-up. I spent the better part of the morning trying to get into the conference, with my badge at a hotel across town – a little town called Mexico City with 20 million people and traffic jams that are legendary. I guess one could say I got an up-close and personal look at how a conference like this runs.

After conversations with upwards of a dozen people who spoke varying amounts of English and stops at various offices, they ended up issuing me a new badge. It was actually a very good, early lesson in letting go, as I had wanted to go to a couple sessions in the morning but had to forgo them. I remembered someone's advice about these kinds of conferences, where lots of important information is being conveyed all the time – it's not a question of whether you miss something, it's a question of which parts you miss.

In the afternoon I went to a session on the risk of HIV transmission from someone who has HIV to someone who doesn't when the person with HIV is on anti-HIV treatment and the virus is suppressed "below the limit of detection" in the blood. Last January the Swiss National AIDS Commission issued a report indicating that, under very specific circumstances, it was possible for people in "sero-discordant" (i.e. one HIV-positive, one HIV-negative) relationships to have sexual intercourse without a condom.

As one might imagine, there was an enormous uproar at the time. This is territory no one ventures into, lest the message to use barriers for intercourse gets discarded by people living with HIV, to potentially great harm. Many of us in the community applauded the Swiss for putting this issue on the table, as people with HIV/AIDS know that HIV medication reduces the amount of virus in the body – it's why we live longer and better if we treat the virus than if we don't - and we know that less virus means less virus to transmit. The Swiss statement was the first time that an official entity, upon reviewing the available data, stated so openly that treatment is prevention.

The session I attended was really a pro/con session in which members of the Swiss commission explained what led them to their statement and other panel members contributed scientific perspectives to help frame the Swiss statement. Some members expressed what I would describe as indignation that the Swiss would make such a public statement – the UNAIDS scientific officer expressed grave concerns from a public health perspective, for example. The panel’s community member, a colleague of mine from Greece named Nikos Dedes, expressed support for the statement and pointed out that it really is a call for more "subtle and sophisticated" HIV prevention messages.

Here's my position: Research belongs to the people in whom it is conducted. If the issue is complicated and could lead to dangerous consequences if misunderstood, then the burden is on anyone in a position to do so to relate the results and implications in clear and understandable ways. After all, education is prevention, too.

While I was getting my brain mired in HIV policy and politics, my husband (who has joined me for the trip but is not a delegate to the conference) was out marching with a group of AIDS activists through the streets of Mexico City for universal access to treatment, testing and prevention. He returned from his first-ever AIDS march with his placard (Condoms, Clean needles, Safer sex info Now!), a whistle and some beautiful photos of the streets of Mexico City. Turns out you can see a lot of beautiful art and architecture while marching for human rights! 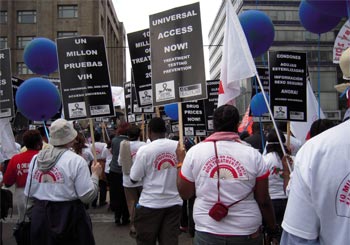 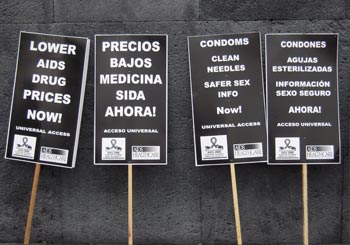 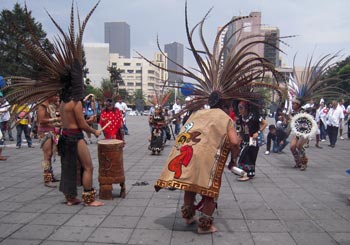 PHOTO (above): Indigenous dancers at the Universal Access March
At the risk of going too long with this (if I haven't already), one thing I wanted to mention is the amazing and refreshing presence of youth at the conference. Most of the volunteers stationed around the site to assist people are from Mexico and many of them are under 25. The volunteer shirts they wear say on the sleeve "jovenes puder" which means "youth power" in Spanish.

Teens and young adults from all over the world are putting on some wonderful events in the Global Village – just totally running their show. There is an energy here that I think would not be if they weren't as present and active as they are.

More than half of new HIV infections worldwide are in people under age 25, so jovenes puder is going to be critical in the years to come.
Go to next entry: Day 3
Return to homepage: Dispatches from the International AIDS Conference in Mexico