Media Inquiries
news@uwhealth.org
MADISON – Many people who work at University of Wisconsin Hospital and Clinics have heard the call to community service. For Barbara Kroll, RN, her call came from an ambulance siren.

For more than 20 years, she has been working as an EMT, covering the nearly 78 square miles of territory served by Montfort Rescue Squad.

Approached to join the squad while in the stands of a local football game, Barbara became an EMT for a simple reason: "There was a need," she said.

Beginning as the youngest member of the squad, Barbara has since become Montfort Rescue Squad's chief. She still attends local football games, but now, she watches over the sidelines as an emergency services volunteer.

When UW Hospital and Clinics decided this year to award its first-ever Community Service Award to an employee who had demonstrated exceptional commitment and leadership in volunteering, Barbara Kroll was a natural choice.

On Friday, August 28, 2009, family, friends and coworkers gathered at a reception in her honor to watch as she received a plaque and a check for a $500 donation to the Montfort Rescue Squad from UW Hospital and Clinic President and CEO Donna Katen-Bahensky.

"A big part of what we do as one of the state's largest employers and the state's academic medical center hospital is go out into our community and help," explains Katen-Bahensky. "Barb is not only a great nurse here at UW Hospital and Clinics, and from what I understand a busy mom and a dairy farmer -- more than enough for most of us -- but for over 20 years she has volunteered with the Montfort Rescue Squad. What really impressed our selection committee were Barb's years of dedication, increasing commitment and continued education and training to benefit the people of her community. Those of us who volunteer know that sustaining such an effort over many years is an accomplishment."

For Barbara, who goes on as many as eight calls a month, averaging two hours each call, receiving the award was recognition of her family and community. "This is a reflection of who I am and where I came from," she said. "What I've done reflects on the rest of the squad, my family."

While the donation will help the Montfort Rescue Squad buy much-needed equipment and supplies, Barbara also hopes that the recognition of receiving the Community Service Award will fulfill another need: an increase in volunteerism.
"It's been in the newspapers a few times. I think it is good PR for hopefully getting new members."
Watch an audio/visual slideshow featuring Barb 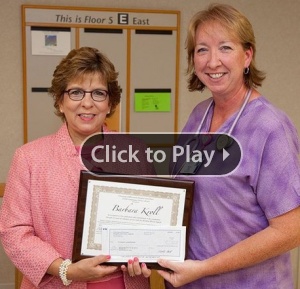