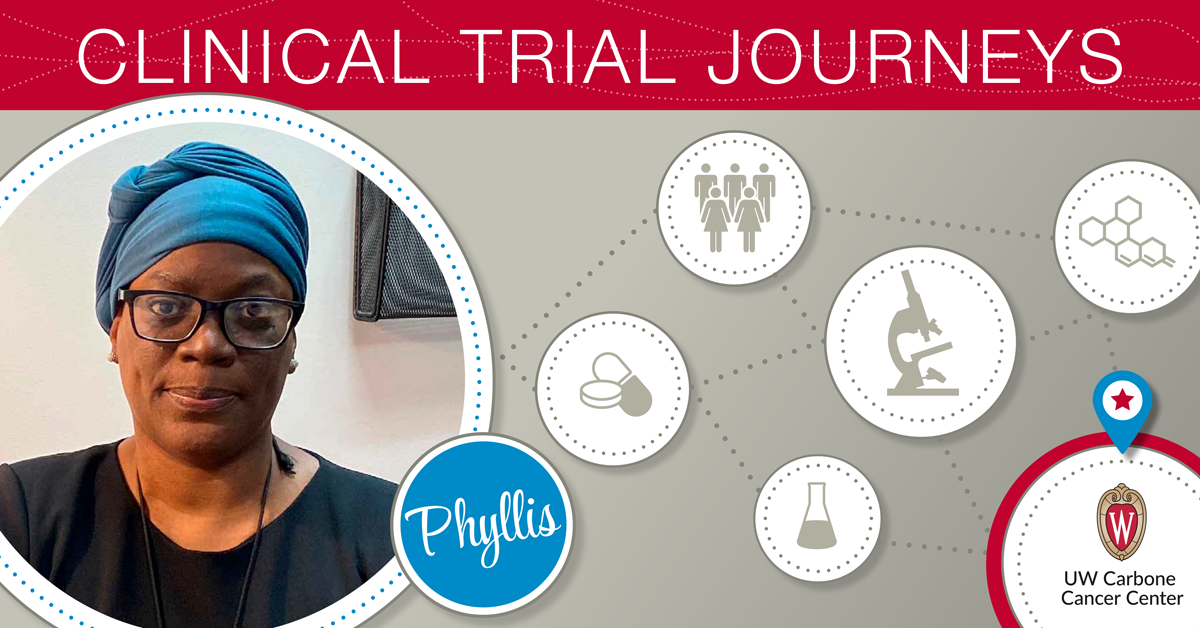 “The information that’s gained is immeasurable.” – Phyllis Esposito on why she participated in a clinical trial.

Months after moving to Madison, Phyllis Esposito was on the lookout for a new doctor.

A Kansas City native, she’d been living with her husband in Olympia, Washington when a job opportunity arose at Edgewood College. Her husband had gone to grad school in Madison, so moving to Wisconsin was a homecoming of sorts. Prior to leaving, she saw her doctor in Washington for an exam and mammogram, and everything appeared fine.

But in May, after finding that new doctor, she went in for a routine physical exam, which included another mammogram. While the physical exam didn’t turn up anything unusual, the mammogram found a large tumor in her right breast – stage IIA breast cancer.

That diagnosis led to several other tests and scans, and an MRI showed that her cancer was bilateral, meaning the disease was present in both breasts.

All of this brought Esposito to the UW Carbone Cancer Center, where she met surgeon David Melnick, MD, MPH, FACS, and oncologist Mark Burkard, MD, PhD, who put Esposito on a multi-faceted treatment plan. “I get to tick all the boxes,” Esposito said. “Two different rounds of chemo, surgery, radiation, possibly more chemo, and then hormone therapy.”

She can also add clinical trial participant to that list.

Burkard just happened to be the principal investigator on a study that’s looking at why some breast cancers respond to paclitaxel chemotherapy, and others do not. Paclitaxel chemo, also known as Taxol, is often used to treat early stages of breast cancer, and is frequently used in conjunction with other chemo drugs.

Because Esposito was already set to receive this drug, and fit the study’s other criteria, Burkard asked if she’d be willing to be part of the trial.

While clinical trials often test new drugs and offer novel approaches to treatment, others refine what researchers know about existing treatments. In Esposito’s case, it was the latter, and required flipping the order of the two chemotherapy drugs she was already set to receive as part of standard treatment, to see what impact it might have on her tumors. While the impact of doing this is certainly of interest to researchers, the immediate benefit to Esposito – who still would require surgery and other treatments – was less clear.

Despite that, she was still interested in taking part in the trial. “I was intrigued by it because I wanted to understand what the difference was between the different chemo drugs and I was also curious to know, given the size of the particular tumor that I have on the right side, what would be the impact,” she said.

Deciding to participate in a clinical trial can be a difficult decision, especially when juggling all the other factors that come with a cancer diagnosis. What helped for Esposito and her husband was how Burkard approached the topic and how he extended the invitation. “When we came into Dr. Burkard’s office, he said, ‘I want to get to know you first, and then I have questions, and then we can talk about everything else,’” Esposito said. “There was just a way of easing us into it that began to build trust and build a relationship.”

As for Burkard, he credits individuals like Esposito for their willingness to contribute to research that will benefit future patients. “It is hard to think of others when facing a new diagnosis of breast cancer, but Phyllis and several other brave women generously agreed to provide one or two research biopsies after getting Taxol,” he said. “This allows us to see how their cancer uniquely reacts to the medicine. In the future, we hope to use this information to pick which patients should get Taxol and which should get something different.”

Over the subsequent three months, Esposito received the paclitaxel chemotherapy, and it does appear that the tumor in her right breast has shrunk some. She’s now moved on to a second chemotherapy drug, meaning her participation in the trial has come to an end. Ultimately, she hopes that other patients who may be in a similar situation will choose to participate in a clinical trial, even if that immediate, tangible benefit might not be clear.

“The information that’s gained is immeasurable,” she said. “While it didn’t necessarily alter what my treatment plan was, or my standard of care, it’s providing information so that if folks can figure this out and people can get treatment a little bit sooner, then that’s all the better.”

Do you have questions about clinical trials? Get in touch with Cancer Connect at 608-262-5223. You can also browse open clinical trials at the UW Carbone Cancer Center’s website.