Clinical Trials In The Age Of COVID-19: One Patient's Story Of Getting Care Safely And Successfully

Clinical Trials In The Age Of COVID-19: One Patient's Story Of Getting Care Safely And Successfully 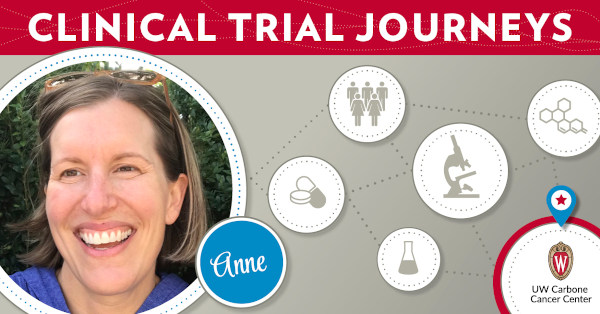 When Anne McRoberts was explaining to her son what a clinical trial was, and why she was on one, he had a sudden and profound moment of insight.

“You could be helping thousands of women by doing this,” he told her.

“It was really sweet, but it also really brought things into focus for me,” she said. Up until then, McRoberts wasn’t necessarily focusing on all the women who could potentially benefit down the road. She was worried about her own health.

In October 2019, the Sun Prairie resident was diagnosed with stage II breast cancer. The diagnosis was perhaps not unexpected – breast cancer ran in her family and she had previously tested positive for a gene mutation that often causes it – but it didn’t make the news any less difficult to deal with.

The diagnosis brought her under the care of the UW Carbone Cancer Center and UW Health Breast Center. While the cancer was still in its early stages, it appeared aggressive and ready to spread to a neighboring lymph node.

Burkard explained she’d be a good candidate for a study testing the effectiveness of a so-called PARP inhibitor in early stage breast cancer. PARP inhibition is a targeted therapy that effectively shuts down one method of DNA repair. In previous studies, it has been shown to be effective in patients with a BRCA1 mutation, such as McRoberts, since the cancer cells lack an alternative repair pathway. This can cause the cancer cells to die and the tumor to shrink.

While she’d still require surgery and radiation later on, Burkard believed the PARP inhibitor approach would lead to fewer side effects than chemotherapy.

Still, having seen chemo work for her grandmother, a breast cancer survivor, McRoberts wanted to be sure she was making the right decision. So she asked Burkard outright: if someone you knew personally was in my situation, what would you have them do?

His response was clear: he’d tell them to go with the trial.

“The next day, I got the paperwork going,” McRoberts said. “That’s what started me on this journey.”

She started her treatment in November, taking the study drug at home while coming in every two weeks for blood work and a check-in with the research team. Once it appeared the drug was working, she was able to reduce her clinic visits to once a month.

Her visit in March 2020 was mostly business as usual, but April’s visit couldn’t have looked any more different. As COVID-19 began to spread throughout Wisconsin, major changes were enacted to protect staff and patients at UW Health clinics. That included patients on therapeutic clinical trials, many of whom still required in-person care.

As a result, McRoberts was unable to bring her husband to the April appointment. She faced a temperature check at the door and sat in a mostly-empty waiting room. When it was time to see Burkard and a research specialist, she was taken to a private room and talked to them by phone, as they were both working from home to ensure physical distancing.

“Even though I didn’t see them face-to-face, I felt like I got great care,” she said.

There were other changes, such as staff wearing masks and face shields, but they didn’t rattle her. She knew it was all being done to keep her safe. “You just have to have a flexible mindset,” she said. “I was impressed with how a big institution like UW was able to mobilize in such a way in just four weeks’ time.”

That flexibility also came into play when she found UW Health’s cancer pharmacy closed that day in April, meaning she couldn’t immediately acquire her next month’s supply of the study drug. Fortunately, her existing prescription came with two spare pills, which she was able to take before an expedited package arrived at her front door two days later with a fresh batch of pills. “I didn’t have to worry about missing a day,” she said. “It was wonderful, outside-the-box thinking.”

Thanks to COVID-19, her subsequent clinic visits have still looked a bit different, although McRoberts has been able to bring her husband again. She’s now done taking the study drug, had a successful surgery and is now moving into the radiation phase of her treatment. At a time when coronavirus is upending so many things, she’s glad her treatment team was able to creatively stick to the plan that was developed months before COVID-19 was really on anyone’s mind. “Truly, I am so thankful to them for taking such good care of me,” she said.

While her cancer journey isn’t over yet – she’ll still require observation in the coming years – she’s had some time to reflect on her participation in the trial, as well as the wisdom her son imparted on her so many months ago.

“All these wonderful medicines start with these trials,” she said. “It was an honor to be part of that.”