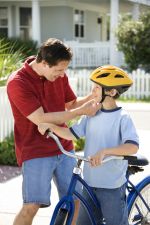 Volunteers will offer free bike helmet fittings for children and adults when avid bicyclists invade Madison streets during Sunday's "Ride the Drive" event, which takes place between 10am and 3pm September 25.

New bike helmets will also be sold at these locations for $10 while supplies last.

The use of a properly-fitting helmet during bicycling, inline skating or skateboarding can reduce the risk of serious brain injuries by more than 85 percent. Three out of four bicycle-related deaths and permanently disabling injuries are caused by brain damage.

Bike helmets are made with a stiff crushable foam liner that absorbs most of the impact and helps cushion the blow that would hit the skull and brain in a crash.

During the "Ride the Drive" in June, volunteers helped 271 bicyclists with their helmet fitting. That was three times as many as last year.

"We received many grateful thanks from parents, many of whom asked us to check their own helmets as well," said Dr. Dipesh Navsaria, assistant professor of pediatrics at the UW School of Medicine and Public Health, who organized the event. "The most common comment we heard was, 'I'm so glad someone is doing this. I really had no idea if I was putting this on correctly.'"