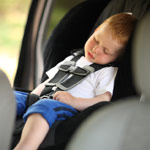 Madison, Wisconsin - Each year children in the U.S. die from hyperthermia after being left unattended in a car in hot weather.

American Family Children's Hospital's experts on child safety are reminding parents that the warmth of the sun can heat the interior of a vehicle very quickly.

Between 1998 and 2009, 445 children died in the U.S. from heat stroke because they were unattended in vehicles that became too hot for them to survive.

"A child's body heats up 3 to 5 times faster than an adult's and unattended children have no way of protecting themselves in a hot vehicle," says Nicole Vesely, American Family Children's Hospital Safe Kids Coordinator. "We want parents and caregivers to take precautions so this tragedy does not happen to them."

More than 50 percent of children who have died from heat stroke were forgotten by a caring adult who became distracted when they left the vehicle. When left unattended by an adult, 30 percent of affected kids gained entry into an unlocked vehicle, became trapped, and were overcome by heat.

It takes only minutes for a child to be at risk of death or serious, permanent injury in a hot car. Drivers must keep car doors locked and keys out of reach of young children.

Safe Kids urges all adults who transport children to take the following steps:

American Family Children's Hospital is the lead agency for the Safe Kids Coalition, which aims to prevent serious injuries and deaths of children younger than 14.