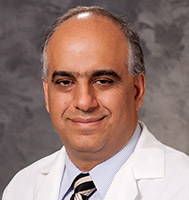 The University of Wisconsin has historically been as a leader in the field of bone marrow and tissue transplantation. Now, with a $1 million addition to the Clinical Hematopoietic Cell Processing Laboratory (CHCPL), UW will stay apace with cutting-edge therapies.

Most bone marrow and hematopoietic cell transplants, used to treat blood cancers such as leukemia, involve harvesting stem cells from a donor and giving them to the recipient patient. In some procedures, cells are sorted to remove those unwanted cells that are expected to produce immune reaction side effects in the recipient known as graft versus host disease (GVHD). Other procedures purify the stem cells that are expected to yield the best results.

A New Level of Cell Therapy

"The building of this lab addition will allow us to get to a new level of cell therapy," said Peiman Hematti, MD, professor of medicine and director of the lab.

The new facility will be designated cGMP, for current good manufacturing practices, as defined by the Food and Drug Administration. cGMP designation means the lab and personnel will follow strict operating procedures in a highly controlled environment to avoid contamination. With cGMP certification, UW Health physicians can conduct more complex cell processing such as growing cells in the lab before giving them to patients.

Because of the addition of these upgraded cell processing capabilities to the CHCPL, UW will be able to participate in promising new cellular therapies and clinical trials, such as a national NIH-supported multiple myeloma vaccine clinical trial. In this trial, led by Natalie Callander, MD, clinicians will collect cancerous cells from bone marrow of patients, then culture them with a combination of peripheral blood cells and immune chemicals called cytokines to generate personalized vaccine which will be administered after a stem cell transplant. The vaccines are expected to teach the patient's immune system to fight off any relapse of myeloma.

"The only reason we have been selected to participate in this multiple myeloma clinical trial is because we are building this new lab," Hematti said. "We expect there will be more more trials coming as well that could only be done in a cGMP lab."

Construction on the new University Hospital cell processing lab began in May 2016 and it is expected to open by the end of this year. The lab addition will also be benefit UW Health clinicians outside the Carbone Cancer Center. It will be used for cellular therapies by solid organ transplant surgeons, cardiologists, cardiovascular surgeons and for cell and tissue regeneration.

One of the Most Promising Areas in Cancer Treatment

Hematti said he would like to keep expanding the cell processing lab's capacities, helping UW Health stay ahead of the curve with exciting cell therapies, a vision he had even before the construction of the new labe began. For example, he would like to be able to complete here, from start to finish, what he calls "one of the most promising areas in cancer treatment today."

During the therapy, called CAR (chimeric antigen receptor) T-cell therapy, a patient's T cells are isolated, cultured and genetically modified to recognize a specific cancer cell surface protein. It is this genetic modification component which will require an even more sophisticated lab than the one currently under construction. Still only being tested in clinical trials, CAR T-cell therapy has been shown to have very high cure rates for leukemia and lymphoma patients. Hematti believes as research continues, this form of cellular immunotherapy will become a powerful method to treat a wide range of solid tissue cancers as well.

“These cells, so far, are providing such extraordinary results, that we need to act now if we want to stay a leader in this field,” Hematti said.