A Responsible Approach to Hip Replacement

A Responsible Approach to Hip Replacement 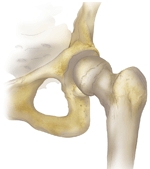 "I tell my patients, right now, you own your joint," says the orthopedic surgeon at the University of Wisconsin. "But if I operate and replace your joint, you'll begin to pay. And if you need it replaced multiple times, you won't own it anymore."

Squire, an assistant professor of surgery at UW School of Medicine and Public Health, isn't talking about money or medical bills, of course. He's talking about the decline in pain relief and joint function many patients experience after having multiple hip replacement surgeries.

And yet, thanks to increased marketing of hip replacement surgery and advances like hip resurfacing, more - and younger - Americans are getting multiple hip revision surgeries.

For some surgeons, the trend begs the question: How many hip replacements are too many?

The answer, says Squire, isn't just about a patient's available supply of bone.

"It's also about the violation to the surrounding tendons and ligaments that occurs during surgery," says Squire, who performs hip and knee replacement surgeries at UW Hospital and Clinics in Madison. "The first replacement has the potential to provide the greatest satisfaction and function to the patient. The second comes closer to recovering a patient's normal function, but it's less likely to be as good. After that, it's no longer a linear progression. You see less function with more surgery."

That eventual decline on surgical "investment" can become a major problem for young and active patients, who place enough stress on their joints to require them to contemplate their first hip surgery in their 40s. Squire tells younger patients that given the expected life span of today's hip replacement technology, the chances are good they'll need at least a second replacement, if not a third.

"They generally blink their eyes and say 'okay,'" says Squire. "They're desperate for a way to relieve their pain."

He attributes that attitude, in part, to extensive joint-replacement advertising that targets these younger patients with promises of restored function. It's also been driven by hip resurfacing, a fairly common procedure in which surgeons reshape the head of a patient's femur and then glue on a metal cap to form the new ball of the hips' ball and socket joint.

In a standard hip replacement procedure, surgeons remove the head of the femur and replace it with a new metallic ball.

While it's true that procedures like resurfacing have made hip and other joint replacements more attractive to an even wider pool of patients, they've also created among some patients the sense that major joint replacement surgery is somehow routine and free of drawbacks.

"I think what happens is that surgeons sometimes downplay the consequences of revision surgery," says Squire. "Some people now think it's as common to replace a knee or a hip as driving through a McDonald's for a burger and shake. But people need to step back and realize that there can be downsides."

Sometimes, those downsides can be serious. Most patients who have a hip replacement end up feeling both more mobile and years younger. But the long-term ramifications of a failed joint replacement – decreased function, less pain relief and extended recovery time - can have a significant effect on a patient's quality-of-life. And every hip revision surgery increases the chances of complications.

Squire says the best way to prevent problems is to have the first joint replacement surgery done by surgeons who are appropriately trained and cautious. Orthopedic surgeons like Squire take a conservative approach to selecting patients who are good candidates for hip replacement, resurfacing and revision surgeries, and offer pain management and lifestyle adaptation strategies to patients who aren't as well suited. Those patients might be prescribed non-narcotic medications, encouraged to lose weight, or instructed to modify their fitness activities to include non-impact options like swimming and bicycling.

Taking a cautious approach isn't always easy, he says, but it's always important.

"It's difficult to look at a patient who says they can no longer move well enough to do their job because their joint hurts. But at the same time, this is not a something for nothing proposition. It's always best to try the least invasive treatments to alleviate patients' pain first."