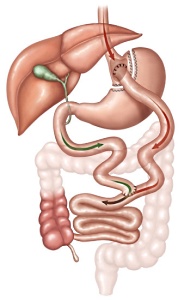 UW Health's Surgical Weight Management surgery team performs gastric bypass or Roux-en-Y surgery, the most common surgery in the U.S. This procedure may be done either through an open approach (large incision) or via the more common laparoscopic approach.

During the operation, surgical staples are used to create a small pouch at the top of the stomach. A segment of the small intestine is then attached to this pouch.

Food bypasses most of the stomach and the first part of the small intestine. Most patients typically have a one- to three-night hospital stay.

The Roux-en-Y gastric bypass operation helps you lose weight by: