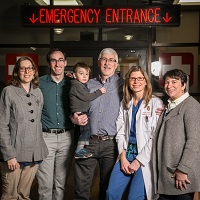 A weekend trip to Madison to see the grandbaby last year turned into a medical adventure for Martin Murphy.

By Sunday, he'd had emergency surgery at University of Wisconsin Hospital and Clinics and learned he had a rare type of cancer. But did this rotten luck change Murphy's mind about the city where his son lives? It did not.

"I love Madison, it's an awesome place," he says. "I could live there."

And for many weeks in 2014 he did, as he opted to return to Madison and the UW Carbone Cancer Center more surgery and a treatment with high temperature chemotherapy.

The adventure started in March 2014. Murphy, who owns Old Orland Insurance, Inc., in Orland Park, had been feeling ill. Still, he set off from his home in south suburban Chicago, eager to see his first grandchild, Colin, and his wife, Maria, who was in Madison providing child care while son, Dan, and daughter-in-law Arianna Murphy, worked at the University of Wisconsin-Madison.

"On Saturday, I felt punkish and couldn't sleep," Martin Murphy recalls. "My wife is a nurse, and she asked if I wanted to see a doctor. When I said yes, she knew I was really sick because I never go to the doctor."

He went to the UW Health West Towne Urgent Care clinic, where the physician who examined him determined he had appendicitis.

"I said I'd get it taken care of when I got back to Chicago, and he said, 'No, you need to go to the hospital now,' " Martin Murphy remembers. At University of Wisconsin Hospital and Clinics, he underwent a CT scan.

"The doctor told me it was the biggest appendix he'd ever seen," Murphy says. "He was surprised I was able to walk."

And then the tone got more serious.

During the middle-of-the- night surgery, the emergency surgeon called Dr. Sharon Weber, professor of surgery and a cancer specialist, for advice. She suspected that the ruptured appendix was caused by a relatively rare cancer of the appendix. That first surgery cleaned up the infection from the ruptured appendix, but a second surgery along with chemotherapy would be necessary to treat the cancer.

Murphy lived in Madison as he recovered from that first surgery, taking long walks in the UW Arboretum with Maria. Meanwhile, the Murphy relatives in Chicago did research on the Internet, assuming that he'd return to Chicago for treatment.

"We said, 'No, we have one of the top cancer centers here in Madison,' " says Dan Murphy, who runs science activities for kids at Morgridge Institute for Research. Dan's wife, Arianna Murphy, is an advisor for the departments of geography and anthropology.

A Unique Treatment for a Rare Cancer

On his return to Madison, Murphy met with Weber and oncologist Dr. Sam Lubner. They explained that he had a condition that is alternately known as appendiceal mucinous cystadenoma or pseudomyxoma. It can spread jelly-like growths throughout the abdomen, attaching to the outsides of organs and the peritoneum, or the lining of the abdomen.

If untreated, the condition can lead to fatal blockage of the intestines.

"Fortunately, it's a slow-growing cancer, so he had time to go home and heal from the first surgery," Weber says.

Weber says that surgery to remove every visible bit of the cancer throughout the abdomen can take as long as 15 hours, including time for the heated chemotherapy solution to be swished around his abdomen. She also told him that patients who are in better physical shape do better during the long surgery. And so Murphy went home to Frankfort, Ill., and trained like Rocky preparing for a rematch.

"They said I didn't need surgery right away, so I trained for it like I was training for a boxing match," Murphy says. "I was running and weight lifting and got in shape."

When he returned to Madison for his cancer surgery at the end of August, Weber was pleasantly surprised to see what great shape her patient was in.

"He was awesome," she says. "Usually when I suggest that people get in shape for surgery, they don't. But I was really proud of what great shape he was in."

"We're looking for little implanted tumors on the surface of the abdominal lining," she says. After she removed all visible cancer, and the incision was closed, the surgical team inserted a port into Murphy's abdomen. Then they pumped in a chemotherapy solution that was heated to about 107 degrees, which makes it more effective in killing any remaining cancer cells. The high temperature intra-peritoneal chemotherapy (HIPEC) solution is gently massaged around the abdomen for about 90 minutes.

HIPEC has been around for years, Lubner says, but recent research shows that it is effective in keeping some cancers at bay longer. It is also used for some types of colon cancer and for peritoneal mesothelioma.

Murphy says he was out of the hospital in six days after the procedure and stayed in Madison with his family as he recovered. He says it was easier to get to daily appointments at UW Hospital, 10 minutes from his son's home, than it would have been to commute daily in Chicago traffic to a nearer hospital, if he could even find one that did HIPEC.

He attributes his quick recovery to having been in good shape for the second surgery. His surgeon Weber agrees.

"I think it really did help," she says. "He's looking great; he's back to playing basketball and weight lifting."