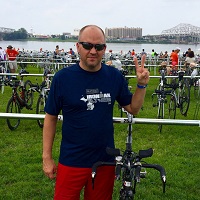 Anyone who has ever ridden a bike understands the importance of the wheel and axle. So while it is probably just a coincidence that Deric Wheeler, PhD, is an avid cyclist and perennial Ironman who also happens to study a cancer-causing protein called Axl, it is no coincidence that he chose to marry his personal and professional passions into raising money to fight cancer.

Wheeler, an associate professor of human oncology at the UW Carbone Cancer Center, runs a translational research lab that investigates how some cancers develop resistance to treatment. His research has led to the development of two clinical trials offering patients a more personalized therapy depending on their type of cancer.

The Significance of Axl

Register to ride on September 18

"We study a set of proteins that are on the surface of cells called receptor tyrosine kinases that transmit signals telling the cell to survive, divide and spread," Wheeler said. "Our ultimate goal is to develop new antibody-based therapeutics that directly target these receptor proteins because this approach is more direct and less toxic than standard chemotherapy."

The best-studied receptor tyrosine kinase in human cancers is called the epidermal growth factor receptor (EGFR). Over three decades ago, an antibody called cetuximab was developed that binds to the EGFR protein on the surface of cancer cells and blocks it, preventing it from signaling the cell to grow and divide. For many patients whose cancers express overactive EGFR, cetuximab initially combats the disease effectively, but almost all develop resistance eventually.

"When we studied how cancers develop resistance to cetuximab, we found the cells express higher levels of Axl, another receptor tyrosine kinase protein," Wheeler said. "Axl actually interacts with the EGFR and turns it on, even if it is being targeted with cetuximab, so we asked if we could block Axl and restore sensitivity to cetuximab."

Because Axl is also on the surface of the cell, it can be targeted with antibodies just as EGFR can be. When they studied cetuximab-resistant cancer cells in the lab, Wheeler and his research group found that if they treated those cells with the antibody to Axl, then the cells would die if also treated with cetuximab.

"Now we can look at a patient's Axl levels and say, 'You've got a lot of Axl, so you're going to need an Axl inhibitor in addition to cetuximab," Wheeler said. "That's the thing with cancer treatment, we don't want to just throw drugs at you, we want to logically identify proteins that drive your cancer and personalize your medicine so it will work for you."

Based on his lab's work, Wheeler has worked with physicians in his department to develop a clinical trial looking at treating cetuximab-resistant head and neck cancer patients with an anti-Axl drug. The trial is led by him and Cancer Center members Paul Harari, MD and Randy Kimple, MD, PhD. He also has a second, unrelated trial in breast cancer with Kari Wisinski, MD.

“That’s the cycle we’ve had in the research lab here: discovery to translation to clinical trial,” Wheeler said. “It’s really exciting for a PhD student of mine to take their basic science findings to the patient.”

In the past several years, Wheeler has taken on an additional role: working with Dr. Harari to develop a biking event, The Ride, that raises money for cancer research at UW. The Ride has lofty, but attainable, goals of becoming UW and the Madison-area's signature community event where the money raised goes directly to cancer research, clinical trials and treatments.

"Cancer funding rates are at an all-time low and cancer centers can't survive and thrive long-term," Wheeler said. "We wanted to create an event where the entire community becomes part of our team and helps drive discovery and cure here at the Carbone Cancer Center."

The Ride will be held Sunday, September 18 in Sun Prairie and offers five routes of 3-100 miles. For more information or to sign up, visit their website, theridewi.org.