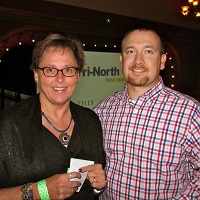 Everyone's cancer story is different, and there is no right or wrong way to deal with a diagnosis. Cathy Wingert has terminal colon cancer, and that is about as much as she will let the disease define her.

"When I share my story, I rarely go into the medical part anymore," Wingert said. "Now it's: I need to find the good in my cancer."

"The story I really want out there is about living benefits, because I had never heard of them before my diagnosis and I want other people to check with their life insurance to see if they have that rider," Wingert said. "I also want to remind people to check their beneficiaries, because in many cases they are outdated."

Living benefits are an option on many life insurance policies that allows someone with a terminal diagnosis to immediately receive the monetary benefit and use it while they are still living. The money received is tax-free, and there are very few restrictions on its use. For example, it can be used to cover medical expenses, pay for long term care or take a vacation. (Each policy is different, so check with your life insurance for details.)

For Wingert, her living benefit is going toward a cause she never expected to become so involved in: cancer research.

In spring of 2014, Wingert was told that her cancer had metastasized with no cure, and that palliative care was the best option – one she was ready to consider. But her children held her to a promise that she would seek a second opinion. In fall 2014, she called the UW Carbone Cancer Center and was referred to Dusty Deming, MD, a medical oncologist and researcher. He is also a colorectal cancer survivor. Wingert and her family were so impressed with Deming that she transferred her care to him.

"He has more hope for me than I have for myself, and I ride on that hope," Wingert said.

In addition to his hope, two things impressed Wingert and her family about Deming. First, as a cancer survivor, she said that quality of life during treatment is clearly important to him. Second, he is a colon cancer researcher, who treats patients and studies the disease in his lab. She credits Deming's scientific knowledge of the disease with why she is living with it under control today.

"I had never thought about the research side of it before, but I started researching what they're doing for colon cancer, and so many times Dusty's name would come up," Wingert said. "When I was diagnosed, I knew nothing about colon cancer, and I think the awareness and research is so important to patients."

Turning Living Benefits Into a Legacy

Wingert and her family began attending UW Carbone events that benefit Deming's colon cancer research, including Bowlin' for Colons and Race for Research. Her whole family – including six siblings and their families – flew to Madison to meet Deming and attend Funk Out Cancer last November.

"I saw the promotional video for Funk Out Cancer, and in it Dusty said, 'The biggest thing is we need an impact and we need it now,'" Wingert said. "And I thought, 'There you go. That's going to be my mission.'"

Wingert met with her husband, Patrick Wingert, and her three children, Brianah (Wingert) Laughnan, Ross Wingert and Raelynn Wingert. She explained that she wanted to take some of her available benefit and donate it to fund Deming's research. She told her family that as beneficiaries, they could do whatever they wanted with their share, but she hoped they would want to partake in this opportunity to support cancer research.

"They overwhelmed me, because it was a spontaneous yes for all of them and they didn't have to do it," Wingert said. "They said, 'Mom, he really cares about your quality of life and we've met him. We know he's going to do it. He's going to find better treatments and hopefully ultimately a cure.'"

Wingert and her family initially donated $50,000 to Deming's research lab from her living benefits. They continue to raise funds for colon cancer research through a number of different avenues.

Deming has taken Wingert on lab tours and tells her about the research his group is doing, with the help of her family's donation. She said he has always been incredibly grateful and appreciative.

And for her family, Wingert hopes she has left them with what she calls "her last great lesson."

"I want to give my children a message to stay strong, courageous and hopeful, and to continue my mission on what's going on in cancer research," Wingert said. "This work is purposeful, meaningful and it keeps me energized. Hopefully that can be considered part of my legacy."