Meet the Schwenns: A Family, a Cancer Community, and a Mission

Meet the Schwenns: A Family, a Cancer Community, and a Mission

Return to Our Annual Report

Be a Cancer Fundraiser 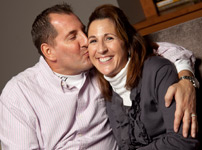 Mindy Schwenn is living with cancer.

When her mother was diagnosed with breast cancer, Mindy and her husband Troy saw an opportunity to instill a culture of awareness and giving at Troy's company, Automation Components, which has hosted a yearly fundraiser to raise money for cancer research since 2005.

Later, Mindy herself was diagnosed with colon cancer, and it became a family affair. Now, all the Schwenns, including daughters Haley, Hannah, and Allie, are actively involved with the UW Carbone Cancer Center. Whether it's by attending the annual Bowlin’ for Colons, or holding bake sales, the Schwenns have built a strong support system, both within their family, and in their community.

Since Mindy's diagnosis of colon cancer in 2007, the Schwenns have made it a point to surround their family with compassionate people.

"From the start, we were honest with our kids about Mindy's cancer," says Troy, who lost his mother to lung cancer himself.

When the family began sharing updates on Mindy's condition with teachers and coworkers, they were uplifted by the response they received.

Haley, a sophomore at Edgewood High School in Madison, recently was involved with an event to raise awareness and funds for the UW Carbone Cancer Center at her school. It started when the coach of the school's volleyball team had the idea to hold a "pink out" to raise money for cancer research during one of the team's matches. Haley, who is a setter on the team, became involved as soon as she found out. Other players and parents followed suit, helping with door prizes and a raffle.

While awareness and money for research is a noble cause for anyone, Haley also derives strength from knowing her classmates and teachers are there for her.

"I didn't talk a lot about my mom's cancer at first, but it helps to know that people support me at school," says Haley. "It was really special having everyone there for the event representing my mom. I feel good knowing everyone came together for this cause."

At Hannah and Allie's school in Cross Plains, the sentiment is the same. Recently St. Francis Xavier held a bake sale and donated the proceeds, in honor of the Schwenns and other families battling other gastrointestinal cancers, to the annual "Bowlin' for Colons" fundraiser for colon cancer research.

"It helps to know that the people care," says Hannah, now 13.

Allie, who at 12 is the youngest of the Schwenn clan, sees the fundraisers in a similar light.

"When I see that we've helped," she says, "it makes me feel like I'm making a difference."

Mindy still gets scans and treatments for her cancer that moved to her lungs, but for now, the Schwenns have not changed the way they live their lives. If anything, Mindy's condition has made the time they spend together more special.

"When we go on vacation," says Mindy. "It's a time for us to bond and enjoy each other's company as a family."

"The cancer doesn't stop us," she continues. "Every moment together is a time to make memories."

It's these memories, made with each other at home, with colleagues at work, or with classmates at school, that the Schwenns know will endure. None of them goes it alone – the support system they have built won't let that happen.