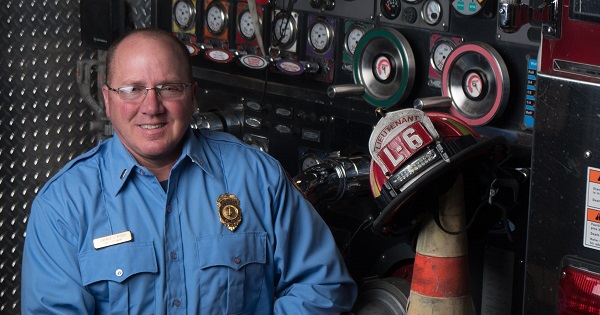 Madison Fire Department Lt. Terry Ritter isn’t a “glass half full” kind of guy – he’s just happy to have a glass to fill with more days of life.

A few years ago, his diagnosis of metastatic melanoma was so grim that he sold his “toys” – a camper, bikes and more - “so my wife wouldn’t have to look at them when I was gone.”

But thanks to timely medical advice at the hockey rink, extensive surgery, and a clinical trial through the UW Carbone Cancer Center, Ritter is back to biking and climbing and treasuring each day.

“My wife Danielle and I recognize we have a glass to fill and appreciate and celebrate daily as it overflows while we watch our children grow and succeed through experience.”

In a way, Ritter is following the advice that he used to give parents as a youth hockey coach: Don’t yell at the kids when they fall; cheer when they get up off the ice.

Ritter’s cancer journey actually began at an ice rink. It was 2011 and Ritter, then 48, had discovered a large, hard lump on his chest while lifting weights at the firehouse. You should get that checked out, said the hockey mom who helped manage the team. His mother, the late Carole Ritter, a nurse practitioner, agreed.

When the metastatic melanoma diagnosis came back from the pathologists, a UW surgeon who reviewed his file told him he’d be hearing soon from Mary Beth Henry, a nurse practitioner with the UW surgical oncology program. It was the beginning of an amazing relationship.

“Mary Beth Henry did so much for me-- she is the kind of person who makes things happen,’’ he said. She got him in for a PET scan in two days when another patient canceled, and soon he was meeting with cancer surgeon Dr. Sharon Weber to plan his surgery.

Ritter, a former police officer who was trained in interrogation, liked what he heard from Weber, and what he saw in her body language.

“She really infuses her patient care with intelligence and dignity,’’ says Ritter. After the two agreed on a surgical plan, it was on to meet with medical oncologist Dr. Mark Albertini, to see what could else be done to keep the melanoma from returning. Ritter already knew his odds with surgery alone were slim.

But Albertini offered an alternative to standard care: Ritter could try a clinical trial of a substance studied in the lab of UW Carbone researcher Dr. Paul Sondel. The drug, hu14.18-IL2, is a targeted antibody that delivers immune-activating interleukin-2 to the location of cancer cells. Sondel had shown that it had promise in treating a children’s cancer called neuroblastoma, and Albertini was leading a clinical trial to see if hu14.18-IL2 combined with surgery worked against melanoma.

Ritter and his wife talked about it, and decided that with young children at home, he really needed to try everything possible.

“You really shouldn’t go online,’’ he says now. “If you Google metastatic melanoma in the lymph nodes, you see that there is no survivability.”

It didn’t hurt that he was also very impressed with his first meeting with Albertini.

“I thought, ‘this guy is really dialed-in. He’s evidence-based and progressive,’” Ritter recalls thinking. He took part in the clinical trial, and while he experienced side effects, including extremely low blood pressure, the antibody worked.

Ritter received an initial dose of hu14.18-IL2 before surgery. Weber then operated on him, removing two melanoma tumors and every trace of cancer she could find. Ritter then received two additional courses of the antibody.

Ritter recently passed the five-year mark of being cancer-free, but the monitoring continues. He says he lives his life after metastatic melanoma on a short horizon, taking nothing for granted past his next doctor’s exam.

Sometimes Dr. Weber will get an early-morning text from Ritter, who often bikes the 15 miles between his home and the fire station.

“He’ll pause halfway, and watch the sun come up and tell me how happy he is to be alive,’’ Weber says, calling Ritter’s survival against the odds “truly amazing.”

At work, in his job as a paramedic, he might be helping deliver a baby or racing to a fire. At home, with wife Danielle and kids Alex, 14, and Anabel, 13, you might find him packing up his family for a week of snowboarding in the Rockies and desert biking in Moab, Utah.

“I choose to live with vitality and to live in the now,’’ he says. “When I got the diagnosis, I was told not to take any time for granted and I don’t.”