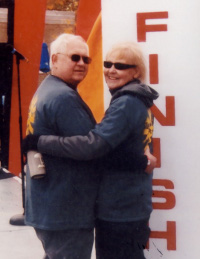 I received a lung transplant in February 2012. I am a 68-year-old wife, mother and grandmother and was a psychotherapist for more than 25 years.

In June 2011, I closed my private practice due to my failing lungs and embarked on being assessed as a candidate for a lung transplant. I was placed on the wait list in September 2011. Although I've experienced a rather bumpy road since transplant, I am on an upswing.

A poignant event occurred that brought this "upswing" to light. Early in August 2012, our adult children registered TEAM K & H PONEC (named in honor of myself and my husband, who was and is my rock) for the American Lung Association's Fight for Air Walk, to be held at the Milwaukee County Zoo. When they registered our team, the kids hoped that I would feel well enough to be there to at least watch the walk. At that particular time, my health condition was pretty rough and I really couldn't even imagine that I could be present at the event. But I had hope.

My health gradually improved, thanks to the excellent and tenacious medical care I received from the UW Health transplant team. By the early October walk date, not only was I there to witness it, but I was able to complete the 2-mile walk without a problem. Well, it was really a stroll, but it was exhilarating!

I've been doing exceedingly well ever since. The emotional support and prayers from family and friends - which have been a mainstay before, during and after transplant - warmed my heart and lifted my spirits. It further comforted me to know that other individuals will benefit from the research and the various services provided by the American Lung Association, as I have benefitted from earlier research. Our team raised approximately $2,000 for the ALA, and my hope was that the walk would also increase awareness of the significance of organ donation. My family, friends and I completed our second ALA Fight for Air Walk at the Zoo in 2013.

I may not be able to run a marathon. Come to think of it, I have never been able to run a marathon, but, seriously, life is good. God is good. I'm enjoying the simple pleasures of life: connecting with family and friends, reading, appreciating music, communing with nature, enjoying dining out, taking in a movie and walking unencumbered by an oxygen tank. I also get a "kick" out of being able to go on errands, doing laundry, cooking and doing other household chores. To do what had otherwise been mundane tasks in the past is now a joy - rewarding and exciting. I also think that my husband is pretty pleased that we are a team again, sharing those tasks. Not primarily due to his own self-interests but, more importantly, with the recognition that "I'm back" and we're enjoying both fun and work together.