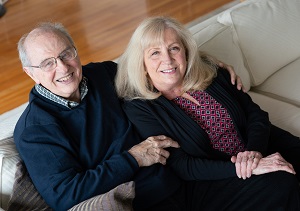 Thirty-three years ago, Don Richards voluntarily underwent major surgery at University Hospital in Madison, during which doctors cut a 12-inch incision in his left side and removed both a rib and a kidney. He was perfectly healthy, but the surgery wasn’t for him — it was for his daughter, Jeri, who needed a kidney transplant. At the time, living donor surgeries were much more difficult than they are now. Yet Don had been in the hospital only a few days after his surgery before he asked to go home. He returned to his work as an architect shortly thereafter and was able to continue life exactly as he had before. “I haven’t had a minute’s problem with it,” says Don, now just shy of his 92 birthday. “I would like to encourage all kinds of people to try to do this.”

Jeri, whose last name is now Kneller, first learned she had dangerously low kidney function during a 5th grade physical. She saw different nephrologists over the next 10 years but never experienced any debilitating symptoms. “I always felt I might not live a normal length of time, but no one ever actually said that to me,” says Jeri.

In 1979, she graduated from Northern Illinois University in DeKalb, Illinois, with a degree in advertising. After graduation, she was living in Barrington, Illinois, when she started suffering from the effects of her kidney disease. Her father, who had recently moved to Middleton, wanted to give her his kidney and suggested she travel to Wisconsin to undergo testing. “UW Health had performed more living kidney transplants than any other place,” says Don.

The transplant was on February 13, 1985. A year and a half later, Jeri married Tom Kneller, and the two wanted to expand their family. They lost their first baby at 20 weeks, and after many tears and prayers, she became pregnant again. Their son was born 13 weeks premature, but he survived after two months in the Neonatal Intensive Care Unit, and they named him Brandon to honor Jeri’s father and kidney donor.

In 2002, Jeri needed another kidney transplant, because her first pregnancy had been very hard on the kidney her father gave to her. She received a kidney from a deceased donor, and it has been working well since. Still, she remains eternally grateful to her father for his gift of life. “He has always been my hero,” says Jeri.