After 30 years in nursing, and a military career, Jerome Christensen thought he had seen it all. He never imagined how important all those experiences would be in his own health struggle.

As a young man, Jerome originally joined the Navy as means to pay for college. He was a Navy medic, but quickly decided he wanted to be a nurse. "I saw what they were doing for patients and knew that work would be right for me," says Jerome.

After he left the Navy, he joined his mother and brother as nurses at St. Mary's Hospital, a Level 2 trauma center in Kankakee, Ill. As an emergency room nurse, Jerome says he "saw more bad things there then I did in the military," but continued that work for 10 years before returning to the Navy. Jerome served as the only nurse on the USS Nimitz in the Persian Gulf. After he developed an allergy to latex, Jerome left the Navy and returned to St. Mary's as a nursing supervisor. 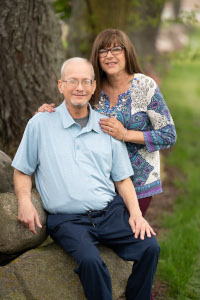 Jerome loved his work. Life was good. He was happily married to Mary Kay and spent time keeping up his house and large property. His lengthy nursing career gave him the insight for how he should be cared for, if his health ever changed. He never guessed how much he would need that help.

In 2015, Jerome began experiencing stomach problems. Tests showed he suffered from undetermined non-alcoholic cirrhosis of the liver. His abdomen would fill with fluid that needed to be drained, and for months, that was his routine. To ease this burden, a shunt was placed, and new medications were prescribed. As a nurse, he grasped everything he was experiencing and asked a lot of questions. He understood exactly what his doctors meant when they said, "It's time that you're listed for a liver transplant."

Originally listed at a Chicago transplant program, and knowing that he was low on the waitlist, Jerome did some research. "It's odd to be sick enough that you need a transplant and then hear you're not sick enough to get a liver," says Jerome.

After spending some time do online research, he soon learned that wait times at UW Health are shorter than other programs, and with excellent outcomes. The program is one of just six in the nation approved to serve Veterans and works in tandem with the specialists at William S. Middleton Memorial Veteran's Hospital liver transplant program. Jerome made the four-hour drive to Madison, Wis., to meet the team and be evaluated. That's where he learned that he needed a heart bypass, or he wouldn't survive a liver transplant.

After he recovered from the bypass surgery, Jerome was placed on the active liver transplant wait list. He continued to struggle with his liver issues, lost his appetite - and 70 pounds - and "looked ancient," says Jerome. "I got tired so easily and had absolutely no strength." Gratefully, within weeks of wait listing, Jerome received his gift of life.

Even as a nurse, transplant was new to Jerome, but "they explained everything very thoroughly, in a good way, that impressed me," says Jerome.

"I know what it means to have good care, and everyone was amazing," says Jerome. "When I saw that everyone was happy - from housekeeping to the doctors - I knew I was in the best place. I thought to myself, 'I'd love to be in charge of this unit.' That's how pleasant it was."

Within weeks, Jerome's appetite returned. He's back at home and enjoying the life he knew before he became ill. He's looking forward to making tables out of a hickory tree that fell down on his property. "Maybe I'll make some shelves, too, and a shadow box for my military awards," says Jerome.

Now married 15 years, Mary Kay and Jerome are planning to renew their wedding vows in January. "We're going to do it up right!" says Jerome.