When Terry Grapengieser retired from the printing business in 2006, he had big plans for an active retirement: Traveling across the country with his wife, Marjorie.

Instead, the Appleton resident found himself in a fight for his life. Terry, now 68, began experiencing shortness of breath when he was mowing his lawn in the summer of 2007. He chalked it up to heatstroke, but when the problem continued in the fall, he saw an Appleton-area doctor. The doctor diagnosed him with cardiomyopathy - an enlarged heart. Terry began taking a regimen of medications and started aquapheresis, a technology that removes the excess water and salt from his body. 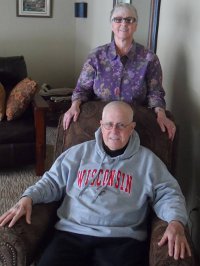 The aquapheresis and medications worked for a while. However, when Terry saw his doctor in summer 2013, he learned his condition had deteriorated and he now had congestive heart failure. "That July was the worst month of my life," he says. "I couldn't lie down because I had a collection of fluid in my lungs and I had three sleepless nights in a row."

Terry decided he needed a second opinion and found himself searching UW Hospital's website for a new cardiologist. "My nephew had attended UW-Madison and I had heard good things about the hospital," he says. He found an online article about the left ventricular assist device (LVAD) and thought it might be just the technology to help him.

He saw a UW Health cardiologist at St. Elizabeth Hospital in Appleton who recommended Terry travel to Madison right away to be admitted to University Hospital.

Terry spent seven days at University Hospital while doctors removed the excess fluid from his body. At the end of that time, he underwent surgery to have the LVAD placed. In September 2013, he was put on the heart transplant list, and just nine days later received a call that a heart was waiting for him.

"We packed so fast you wouldn't believe it," says Terry. "The transplant surgery lasted 12 hours, and afterwards, I felt like a million bucks. The doctors and nurses took such good care of me. It was unbelievable." Terry decided to donate his old heart to medical research. "If researchers can find a cure for this disease, they can certainly have my heart," he says.

Since the transplant, he has felt better than he had in years. He has returned to doing the activities he loves - from simple tasks, such as mowing the lawn, to traveling.

In the meantime, Terry has had contact with his donor's family. He was 41, lived in Mondovi, Wis., and was a veteran of the Gulf War. Terry has spoken with the donor's mother and brother and plans to visit them later this year.

Terry wants to show his gratitude to his donor by "paying it forward" through volunteering with organ donation. "I now have the liberty to do whatever I want to do," he says. "If my bike breaks down, I'll fix it. My blood flow is better and my sleep apnea is basically gone. Somebody upstairs was really watching over me when I received my new heart."