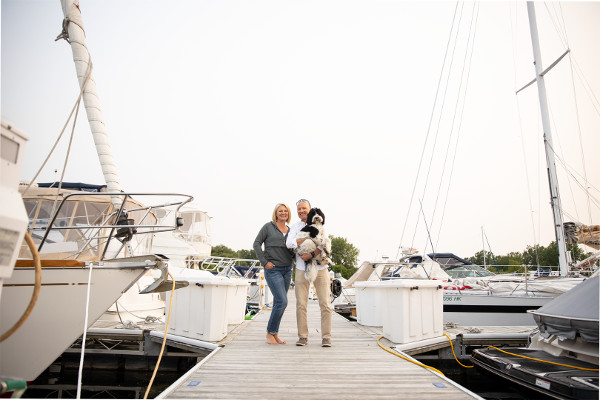 Scott Bader is used to being in control. As a real estate agent in Door County, the Sturgeon Bay, Wis., man woos clients, scouts properties and closes deals. But when he was diagnosed with kidney disease, Scott found himself in a life-threatening situation that tested his limits. What's more, he had to rely on his wife, Heidi, who gave him the gift of life with her own kidney so he could participate in a kidney exchange. He received his new kidney in April 2016, and since then, has been able to live his life to the fullest.

Scott first became sick in 2015. As a child, he had one kidney removed due to complications from a birth defect, and when his remaining kidney started developing problems, the only solutions were either dialysis or a transplant. He resisted going on dialysis for a long time because he was in denial about his condition - until his nephrologist finally told Heidi to bring him to the emergency room. "I spent several months fearing my husband was going to die at any moment," says Heidi. "Doctors told me he could have had a stroke because he waited so long to go on dialysis."

Both Scott's adult daughter and his sister were willing to donate their kidneys to him, but when they learned they couldn't donate because of health issues, Heidi stepped up - despite Scott's protests. While Heidi wasn't a direct match for her husband, they were able to participate in a paired kidney exchange in which Heidi donated her kidney to a stranger, and that stranger's loved one gave a kidney to Scott.

The week before the surgery at University Hospital in Madison, Scott's surgeon, Dixon Kaufman, MD, PhD, FACS, asked if Scott would be willing to participate in a drug trial following his transplant. Belatacept, an anti-rejection medication, had already been approved by the Food and Drug Administration, but UW Health was involved in a trial that would allow patients to substitute belatacept for calcineurin inhibitors and the need for chronic use of steroids. Scott agreed, and when his participation in the study ended two years later, he chose to continue belatacept, which requires him to undergo an infusion of medication once a month instead of taking steroids and enduring their side effects. "I didn't even think twice about it because it's worked so well," he says. "I've had no side effects from the medication at all - except for canker sores."

Because of the belatacept, Scott is able to live his life without limitations. And because of his faith in God and the Baders' incredibly supportive community and church friends, both he and Heidi have thrived in their personal lives and in work. "When I woke up after my transplant and looked out the window, I thanked God for the most beautiful sunrise I'd ever seen," Scott says. "Now, every morning, I thank God for a beautiful sunrise. The gift of life has allowed me to enjoy each day to the fullest."