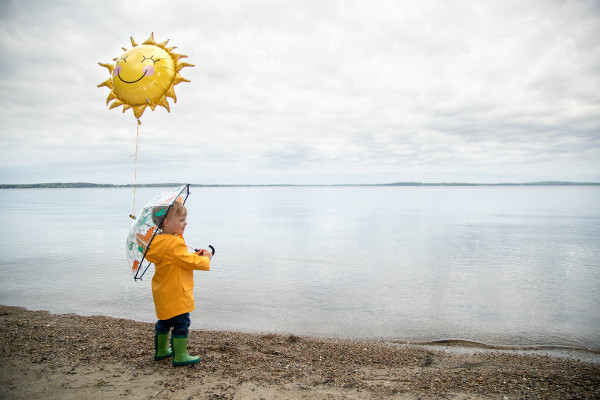 Many children who need a kidney transplant at an early age are born with a condition that causes their renal system to deteriorate. Not Rykal Wasson. The Ettrick, Wis., boy was a happy, healthy infant - until he developed a case of pneumonia at 11 months of age that took only a few days to turn his young life upside down. Rykal had developed pneumococcal hemolytic uremic syndrome, a rare complication of pneumonia that causes the kidneys to shut down.

When doctors told his parents, Lacey Johnson and Wally Wasson, that he was in complete kidney failure and needed emergency transport to American Family Children's Hospital in Madison, she could hardly believe it. "I knew there was something wrong with my son, but I didn't imagine it was this bad," she says.

They arrived in Madison in the middle of the night and met Sharon Bartosh, MD, pediatric nephrologist at UW Health, right away. Dr. Bartosh put Rykal on peritoneal dialysis - a method of cleaning the blood when the kidneys no longer work well. For two weeks at the hospital, Rykal required dialysis in the pediatric intensive care unit 24 hours a day. Once he was stable, he moved to the general transplant floor, where he stayed for another three weeks. He went home on dialysis, and a month later, his parents learned his kidneys would never regain full function and he needed a kidney transplant.

Both Lacey and Wally underwent testing to be living kidney donors, but Lacey was a better match than her fiancé. On Aug. 2, 2018, she gave the gift of life to her 19-month-old son. "I would do anything for my kid," she says. "It was a long process, but I would do it again in a heartbeat."

While Rykal was fortunate that his mother could be his living kidney donor, the frequent trips to Madison and unpaid time off from work before, during and after his transplant, took their toll on his family. Lacey and Wally struggled to keep up with their house payment and other bills. So, their community stepped up and organized a benefit to help the family in the spring of 2018.

After receiving his mom's kidney, Rykal blossomed. He had endured so many restrictions while on dialysis, and one by one, his doctors began to lift those restrictions as his health continued to improve. For example, while on dialysis he was only able to drink 8 ounces of water in a day. Now, he drinks about 2 liters of water each day. He loves to ride his four-wheel bike and, given the choice, would stay outside all day, every day.

"With everything he has been through, he has no fear," says Lacey. "He has boundless energy. I firmly believe Rykal is going to be one of the strongest children anyone has ever met."