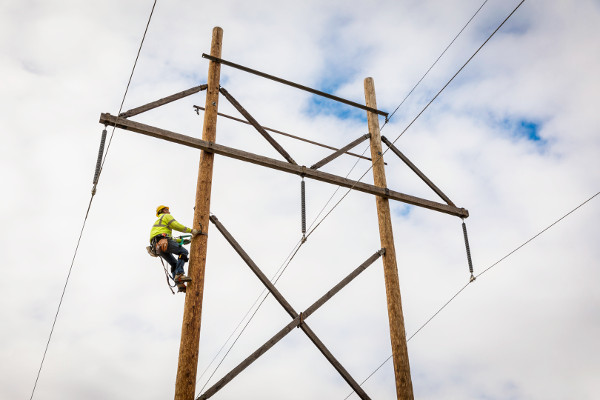 In Fall 2016, Landen Wilke was living the good life, and the possibilities for his future were endless. He was in a serious relationship with the woman who is now his wife. He was attending school at Northeast Wisconsin Technical College in Green Bay, Wis., to study electric power and distribution - and had discovered he loved it. But then Landen learned his aunt, Julie Hess, was seriously ill with liver disease and needed a living liver donor. Both his mother and father were tested and unable to donate to her, so he decided to take a day off from school and travel to University Hospital in Madison, to see if he was a match.

He was. And just like that, he began preparing to be a living liver donor for his aunt.

"I'd be lying if I said I wasn't scared," he says now. "But I knew from the beginning that if I was a match, I was going to go through with it." He worked hard to keep himself healthy, including eating right and not drinking alcohol, and on Jan. 10, 2017, Landen underwent surgery to donate part of his liver to his aunt.

The surgery took place over Landen's winter break, so he missed very little school. He was back in class just three weeks after the procedure. "It was exhausting," he says. "But I wanted to be there. I couldn't do any type of lifting, because my doctors didn't want me to get a hernia, so I did less physical work during my classes. I got cleared to climb poles again after seven weeks. It was painful, but I just kept thinking, little by little, I'm going to get stuff back. Now, I have no limits at all, and I am completely back to the way I was before the surgery."

Landen, 26, is a lineman apprentice and enjoying his new life as a married man. He sees Julie often, and is happy knowing that she's doing well. "We were always close, but I feel like we're a lot closer now," he says. "I'm glad I did what I did."