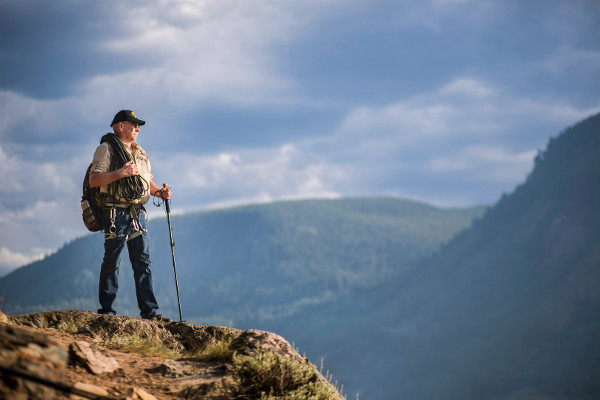 Harlan Eckert, at age 68, is still the quintessential outdoorsman. He hunts elk, kayaks, repels off cliffs and works on his brother's dude ranch chasing cattle and bucking hay. Splitting his time between his childhood home in Wisner, Neb., and the dude ranch near Eagle, Colo., Harlan likes to push himself as much as possible.

Ten years ago, he wondered if his active life was coming to an end. In 2010, he started developing severe problems with his upper respiratory tract, first coming down with the flu and then pneumonia. Within a matter of weeks, his lungs were functioning at less than 20 percent capacity and it was clear to his doctors that he needed a lung transplant quickly or he would die. Harlan served in the Vietnam War as a long-range reconnaissance sniper for the U.S. Marine Corps, so he receives health care services from the Veterans Administration. His caretaker drove him from Nebraska to the William S. Middleton Memorial Veterans Hospital in Madison, one of just two lung transplant programs in the United States approved for veterans. Harlan was placed on the wait list for a new set of lungs the same day he arrived in Madison, and just 3 hours later, he learned he was about to receive the gift of life. "I was unloading my vehicle in the parking lot when I got the call," he says. "I probably hold the record for the least amount of time on the wait list."

When Harlan served in the Marine Corps, he wanted to be on the reconnaissance team because it was comprised of the top 3 percent of all recruits. "I wanted to be in a select, very smart, very athletic group," he says. A carpenter by trade, he continues to challenge himself following his transplant. Two years ago, he spent time roaming around Alaska - camping, boating, hiking and panning for gold. He works out regularly and keeps busy at the ranch and participating in other outdoor activities. His transplant has enabled him to pursue a limitless number of hobbies and interests that never would have been possible without a lung transplant.

"I've had 10 years with this gift of a new set of lungs," says Harlan, "and I plan on using it to the fullest and making it last as long as possible. There's no end to what I am able to accomplish."